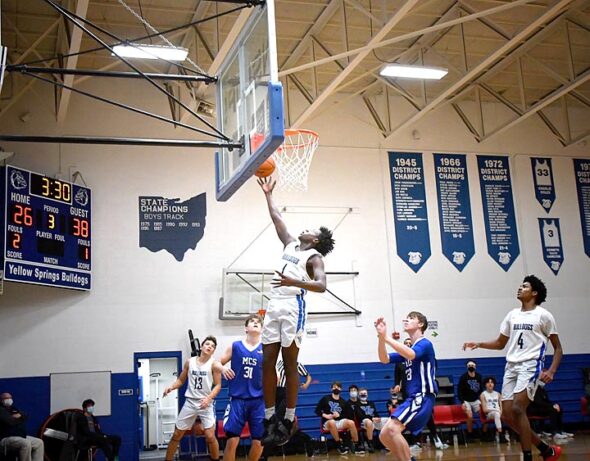 Malik Thomas vaulted above his competitors for a layup during the Yellow Springs High School boys varsity basketball team’s overtime victory against visiting Middletown Christian on Friday, Dec. 11. The home team, though trailing most of the game, came back in the fourth quarter to force an overtime, and won in thrilling fashion, 62–56. Flanking Thomas are fellow Bulldogs Eli Eyrich, left, and Javas McNair. (Submitted photo by Michael Knemeyer)

The YSHS bowling team encountered two challenging Metro Buckeye Conference matches this past week. The team faced Emmanuel Christian on Tuesday, Dec. 8, at Northridge Lanes and fell short by 268 pins. Emmanuel Christian finished with 2,234 pins and YSHS with 1,966 pins. It was a well played match by both teams and a rematch is set for later this season at YSHS’s home lanes. Individual game scores were:

The second match of the week was on Monday, Dec. 14, against Legacy Christian Academy at Beaver-Vu Lanes. It was another great match and the local team bowled well but once again came short of a victory. Legacy Christian bowled a 2,177 and YSHS a 1,873, which put the team down 304 pins. Individual scores were

The 2–2 Bulldogs’ next match will be after the winter break on Jan. 5 against Catholic Central at Victory Lanes.

The YSHS girls basketball team notched a pair of victories over the week to move to 5–1 on the season and 1–1 in conference play.

On Monday, Dec. 14, the team traveled to Twin Valley South and eked out a win, 52–51. YSHS was winning the whole game before Twin Valley South hit a layup to take the lead by two. Smith then came down the court and was fouled on a layup, which went in, tying the game. She made the free throw to take the lead. Then Longshaw had the game-winning steal to cement the win.

Smith is currently leading the league in scoring, with an average of 29.3 points per game, as well as steals, with 5.7 per game, and blocks, with 1.2 per game. Foster leads in rebounds, with 10.5 per game.

On Friday, Dec. 11, the YSHS boys basketball team hosted the Middletown Christian Eagles. The Eagles jumped to an early lead but the Bulldogs fought back during the fourth quarter. YSHS tied the game up with 30 seconds to go and got a stop to force overtime. In overtime, YSHS used momentum and free-throw shooting to seal the victory, 62–56. The Bulldogs were led in scoring by DeAndre Cowen and Nate Curtis, who had 31 and 11, respectively. Javas McNair and Malik Thomas chipped in 10 and eight points, respectively. Eli Eyrich led the way with five assists as the Bulldogs got their second win of the season.

Last week, on Dec. 8, the team fell at home to conference opponent Legacy Christian Academy, 55–24. Cowen and Thomas each had six points in the loss.

The McKinney School combined boys and girls basketball team came out with a lot of energy on Monday, Dec. 14, against the Miami Valley Saints for the first home match of the season.

It took a minute for the Bulldogs to settle down as they missed their first several attempts and found themselves down seven to six at the end of the first quarter. However, they came out determined and organized in the second quarter to find their rhythm to take and maintain the lead for the rest of the game, earning a 37-23 victory.

The team’s defense looked more polished as players worked together to convert turnovers and bring down rebounds. Lacy Longshaw led the Bulldogs, knocking down four three-pointers for a total of 14 points on the night. Landon Harris converted several steals and drove hard to the paint to add 13 points. Kaveeyon Wagner grabbed some key rebounds and added six points to the Bulldog win, while Alex VanAusdal made some major defensive plays in the second half and put in four points as well. The Bulldogs will be back in action against conference foes Emmanuel Christian at the end of the week.