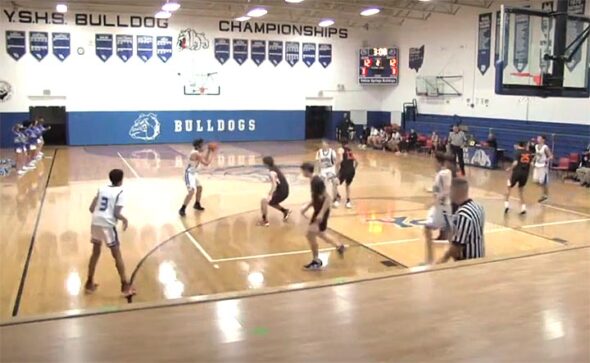 The Yellow Springs High School boys JV basketball team lost a hard-fought battle at home on Saturday night against Ansonia, 28–24. No spectators are allowed at the YSHS gym through the end of the year. Instead, games are streaming online at the YSHS Athletics YouTube page: https://bit.ly/36r4HMD. (Video still from YouTube.)

On Friday, Nov. 27, the Yellow Springs High School basketball team hosted Greenon for its home opener. However, a decision to not allow spectators inside the Bulldog gymnasium meant that only coaches and officials were there to witness the contest.

The Bulldogs played well against the Knights in the first half and were down only seven at halftime. In the second half the team had some defensive struggles and the game quickly got out of hand. Greenon won by a final score of 84–49. DeAndre Cowen led all Bulldogs with 25 points, with Nate Curtis III and Javas McNair both pitching in eight points. Eli Eyrich led the Bulldogs in assists and steals, tallying five and four, respectively.

The next night, Saturday, Nov. 28,  the Bulldogs welcomed the Ansonia Tigers in another home game. YSHS played significantly better than on Friday night but could not get closer than a five-point deficit. It was a very close game the entire way, but the Bulldogs ended up losing by 13, with a final score of 46–33. YSHS was once again led by Cowen with 16 points. Curtis was close behind him with 13 points.

Bowling kicks off season with a W

The Yellow Springs High School varsity bowling team kicked off its season on Monday,  Nov. 23, against Middletown Christian, at Beaver-Vu Lanes in Beavercreek.

Amidst COVID, the Ohio High School Athletic Association has provided all teams and bowlers with strict guidelines to ensure the safety of all who are participating. All bowlers wear masks, do not share bowling balls and each team must stay in their designated lane. Each match consists of  five bowlers who will play two games and two baker games.

Individual scores from the match were:

I am very proud of the boys and their play.  We have a great group of bowlers who are doing all they can to maintain some sense of normalcy through this unique time.