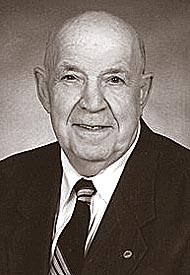 Andrew was the son of Andrew and Frances Kostic, of Hamburg, Penn., and brother to Thomas Kostic; all preceded him in death. He attended the Hershey Industrial School in the early 1940s before graduating from Cass Township High School in 1948.

He married Nellie McGrath, of Greenleaf, Kan., at the Sacred Heart Cathedral in Salina, Kan., on Nov. 11, 1949. They were married for 61 years until her passing on Nov. 9, 2010. They shared their love with their nine children, Terry, Sherryl, John, Mike, Tom, Mary, Jim, Andy and Matt; 20 grandchildren; and 16 great-grandchildren.

Andrew dedicated his life to God, country and family. He was a devout Catholic all his life and an active member of St. Helen’s Church for nearly 50 years. He was a eucharistic minister and usher for the church. He also enjoyed dealing showdown poker at the church’s annual festival.

He enlisted in the Air Force at age 18 and traveled to the Pacific in support of the Korean War. He faithfully served his country for 21 years, traveling to islands of the South Pacific and numerous locations throughout the U.S. before retiring in 1969 and calling Riverside, Ohio, home. He then served the community as a letter carrier for the U.S. Postal Service for almost 20 years. He and Nellie enjoyed helping others and volunteered at the Wright-Patterson Air Force Base Hospital to assist service members and veterans.

A Mass of Christian Burial will be held at 11 a.m. on Jan. 25, 2021, at St. Helen’s Parish, located at 605 Granville Place in Riverside. The state of Ohio is under a mandatory mask order and has required that face masks be worn in all public places.