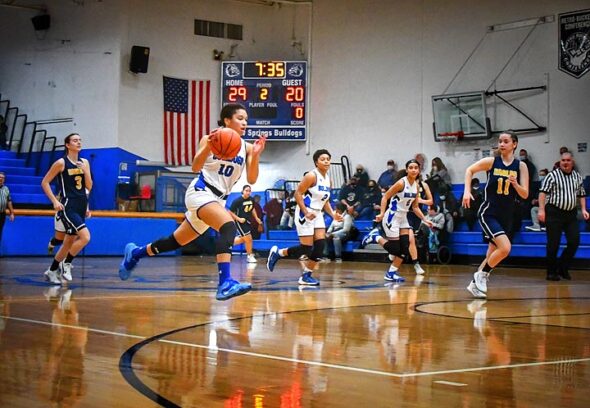 Angie Smith charged down the court with the ball in a fast break during the YSHS girls varsity basketball team’s win at home on Saturday, Jan. 9. Smith scored 29 points in the win, adding to her career tally of 1,260 points. Also visible are, from left, teammates Annlyn Foster and Corinne Totty. (Photo by Michael Knemeyer)

Angie Smith remembers her first years of playing basketball. She was three years old and living in Xenia. Behind their house the family had an outdoor basketball court where she would play with her older sister, Elizabeth, and their father.

“You know, sibling competition — I wanted to be better than her,” Smith recently reflected.

It was the start of Smith’s love and passion for the game of basketball.

Now a Yellow Springs High School junior, Smith is on her way to achieving an impressive feat: scoring 2,000 points by the end of her senior year.

It’s a personal goal for her that’s within reach.

On Saturday, Jan. 9, Smith scored 29 points in the Bulldogs’ 61–41 win against East Dayton Christian, bringing her to a total of 1,260 points over her high school career.

Smith surpassed the 1,000 point mark as a sophomore, her second year on the varsity squad, and views that as her most significant basketball accomplishment so far.

Smith is averaging 29 points per game this season, which has brought new obstacles with the pandemic. The team has only played nine games so far, with some scheduled games being postponed because of COVID-19.  But the team is going strong, with a 7–2 record.

Pregame rituals remain important during this time, Smith said. For Smith, a typical pregame includes a strategic discussion with her coaches and teammates about the opposing team and some upbeat music to get her ready for game time.

“It is important to listen to our coaches before every game to get the team ready,” she said.

This year the team welcomed a new head coach, Nick Minnich, who was already a friendly face around the YSHS girls basketball program. Minnich has coached alongside his father, Tim, for the past four years as an assistant. Together the Minnichs have built an extraordinary local program for high school girls and helped to advance the basketball careers of many, including Smith.

“I got into coaching from my dad, he coached me my whole life growing up,” Minnich said.

Coaching runs in the Minnich family.

“It’s definitely a family thing,” Minnich said. “There is nothing more amazing than going home and talking about basketball with my family.”

For Smith, the coaches have been a good fit. She described the Minnich family as “comfortable.”

“We can all joke around and sometimes it feels like they are more our friends than our coaches,” she said.

One of Smith’s favorite memories as a Yellow Springs High School athlete was from her sophomore year. The team had practice and the volleyball net had been left up. The girls convinced all the coaches to play a game against them.

“They only beat us because we were laughing so hard,” Smith said.

Minnich has big plans for this season. He says that he would like to win the Metro Buckeye Conference. Right now, the team is 1–2 in the conference. Although they lost to conference leader Legacy Christian Academy in early December, the game’s final score of 63– 61 was Yellow Springs’ closest loss to Legacy Christian in eight years.

Minnich will also work with the team to win at least two tournament games this season, he said.

Smith has goals this season as well. From a team perspective, she would like to finish at the top of the league. She has individual goals too.

“I would like to become a better leader and work on my basketball IQ,” she said. “I want to be one of those people who can give inspiring speeches to my team.”

Minnich describes Smith as a different kind of player.

“She came in as a freshman not wanting to score points at all, and now she has 1,260 points as a junior,” he said.  Having known Smith for some time, Minnich has seen her become a team player.

“She realizes that she has to pass and move the ball to have a great team — she knows she can’t do it by herself,” he said. Above all, Smith cares about her team and does not want to be the only player on the court scoring.

“Angie as a player is great, but Angie as a person is even better,” Minnich said.

Smith does not have any plans other than attending college after high school. She is interested in furthering her basketball career after high school but is unsure as of now. Her sister, Elizabeth, attends Ohio University on a full academic scholarship, which Smith says is a lot of pressure to follow.

“I hope she never reads this because she will never let me live it down,” she said, laughing. But growing up watching her sister play basketball at YSHS was inspiring.

“Everything she did at Yellow Springs made me realize it could be done.”

*Peifer is a 2018 Yellow Springs High School graduate, a writer and a junior at Ohio Wesleyan University majoring in sociology and business.