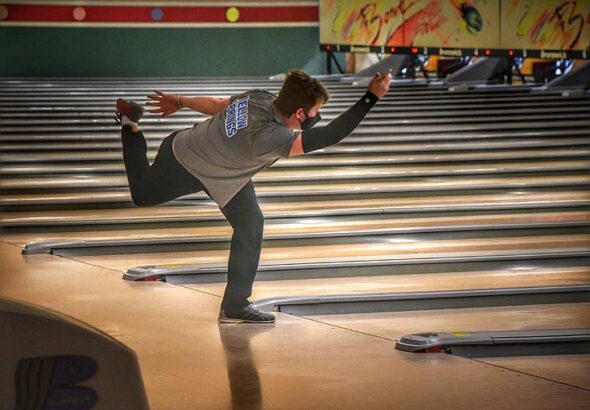 Max Sturgeon rolled during the Yellow Springs High School bowling team’s Jan. 7 match against Emmanuel Christian at Beaver Vu Lanes. Sturgeon bowled games of 193 and 188, averaging 190.5 pins. The team fell short by 72 pins to move to 3–3 in the season. (Photo by Michael Knemeyer)

The Yellow Springs High School bowling team faced Catholic Central on Tuesday, Jan. 5, at Victory Lanes. YSHS bowled well after taking a two-week break for the holidays, defeating Catholic Central by 82 pins to capture their third win of the season. The highlight of the match came when Luka Sage-Frabotta bowled a career-high single game score of 233.

The second match of the week was on Thursday, Jan. 7, as the Bulldogs returned to conference play against Emmanuel Christian at Beaver Vu Lanes.  It was another competitive match between two good teams. The Bulldogs fell short by 72 pins. Their season record is now 3–3.

The Bulldogs have three more matches before the Metro Buckeye Conference tournament, which is scheduled for Saturday, Feb. 6.

The YSHS boys varsity basketball team earned a 70–49 win against East Dayton Christian on Saturday, Jan. 9. Every player on the roster contributed to the victory. DeAndre Cowen led the charge with 22 points, Nate Curtis had 15, Cameron Harris added nine and Malik Thomas scored eight. It was a “true team win,” according to Coach Nick Trimbach. The Bulldogs are now 4–7 at the halfway point of the season.

The YSHS girls varsity basketball team beat East Dayton Christian at home on Saturday, Jan. 9. The score was 61–41, and the team improved to 7–2 on the season with the victory.

Angie Smith scored 29 points on the night despite playing only 17 minutes out of the 32-minute game. She added five assists and four steals. Corinne Totty came away with 12 points, nine rebounds and four steals in the victory, Aaliyah Longshaw added 11 points and seven rebounds and Annlyn Foster finished with five points and 11 rebounds.

A second game previously scheduled for Jan. 9, against Ansonia, was canceled for COVID-19-related reasons.

The McKinney Middle School combined boys and girls basketball team gained a win this past week with action at home.

On Saturday, Jan. 9, the Bulldogs started off a tripleheader for the Yellow Springs basketball programs and got their second win of the season against East Dayton Christian. The Bulldogs took an early lead to the finish line with stellar team defense holding their opponents to only 15 total points. The Bulldogs scored 44 points on the afternoon with a variety of fast break buckets, team plays, as well as several three-pointers beyond the arc. Landon Harris was at the top of the leaderboard with a career-high 20 points. Kaveeyon Wagner battled hard in the paint and added a season-high of 10 points to the total. Alex Van Ausdal and Lacey Longshaw added seven points each.

On the evening of Monday, Jan. 11, the Bulldogs wished the game had gone a different way, as they suffered a 61–24 loss to Dayton Christian. The Bulldog team competed in the first quarter, keeping it tight. They were down by just one point, but the Warriors found a rhythm and made some big runs that the Bulldogs could not overcome. Harris had 14 points on the evening, while Wagner recorded five, Van Ausdal added three, and Longshaw had a bucket for two points. The McKinney team has a busy week ahead of them and are looking to bounce back and add to their win column.