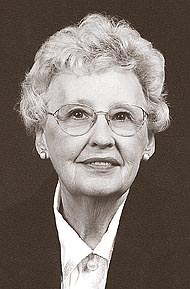 Cloris Virginia “Ginny” (Gooby) Ferguson, of Cedarville, passed away Feb. 3, 2021, at Friends Care Center in Yellow Springs.  She was 93.

Virginia was a member of the Clifton United Presbyterian Church where she served as a Sunday school teacher, as a member of the choir and Women’s Association, and as a deacon for several years.  She also worked as a cook for Cedar Cliff Schools for more than 20 years, retiring in 1991.

A graveside service was held at Massie Creek Cemetery in Cedarville on Monday, Feb. 8. In lieu of flowers, contributions can be made in her memory to Clifton United Presbyterian Church, 183 Jackson St., Clifton, Ohio 45316, or Hospice of Dayton, 324 Wilmington Ave., Dayton, Ohio 45420.

The family would like to extend its gratitude to the staff of Friends Care Center for their many years of caring for Virginia, with special thanks to Kent Little.

Condolences may be expressed to her family by visiting http://www.jacksonlytle.com.

One Response to “Cloris Virginia Ferguson”