The YSHS varsity bowling team competed in the Metro Buckeye Conference tournament on Saturday, Feb. 6, and finished third overall. The team bowled three team games and six baker games at Poelking Lanes Woodman. It was another great outing for the bowlers and their final preparation before sectionals on Feb. 10.

Collectively, the team played well, and individually walked away with a few awards. Krishan Miller earned the Sportsmanship Award, Max Sturgeon received Second Team All-Conference and Finn Bledsoe was awarded First Team All-Conference. The team battled through a year of uncertainty, COVID restrictions, limited spectators and a smaller number of bowlers than previous years.  With that, the team still came out each match and played their best. Performances were: 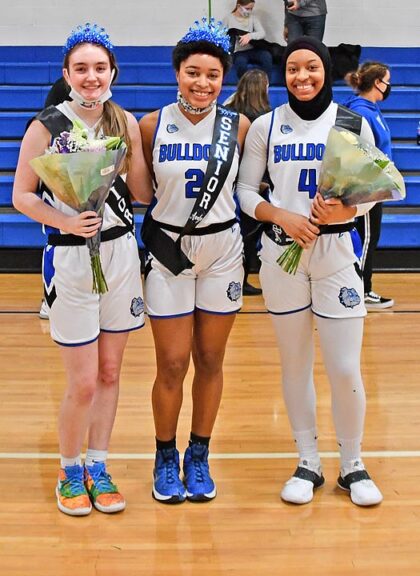 The Yellow Springs High School girls varsity basketball team honored its seniors at a home game against Xenia on Feb. 3. From left are Kayla Ross, Annlyn Foster and Haneefah Jones. The team nearly came away with an upset over the Division I rival, but lost 52–40. (Photo by Michael Knemeyer)

It was a rough week for the Yellow Springs High School girls varsity basketball team as we went 0–3 on the week.

We hosted Xenia High School on Wednesday, Feb. 3. It was senior night, where the team honored its three seniors: Annlyn Foster, Haneefah Jones and Kayla Ross. We lost a hard-fought game to the Division I visitors. We were down 21–13 in the first quarter, made a comeback and cut the score to 26 for Yellow Springs and 31 for Xenia at halftime. We could never gain the lead and lost, 52–40. Angie Smith led the team with 24 points, five assists and six rebounds, Aaliyah Longshaw added five points and nine rebounds and Foster finished with four points and eight rebounds.

The following night, Feb. 4, we traveled to Troy Christian to earn redemption from our loss at home against them earlier in the season. We started the game off with two three-pointers, one by Corrine Totty and the other by Longshsaw. After the first quarter we were up 14–12. Struggling in the second quarter, we only scored three points to their nine, and were losing 17–21 at halftime. It was a close battle, but after the third we were still losing and could never regain the lead. Smith ended the night with 20 points, five assists and three steals. Totty had six points and six rebounds, Longshaw contributed five points, five rebounds and three steals and Foster and Jones added 8 rebounds apiece.

We traveled to National Trail on Saturday, Feb. 6. With a rough start to the first quarter we made a nice comeback, only to be down three at the end of the first quarter, 9–12. We were losing at halftime 13–21. We battled through the second half but came up short with a loss of 26–39. Smith finished with 14 points, seven rebounds and five assists, Foster had six points, eight rebounds and four steals and Longshaw added four points, five rebounds and five steals in the loss.

The Yellow Springs Boys basketball team had a busy week that was full of lows and highs. After suffering a tough loss to Middletown Christian, 44–28, on Monday Feb. 1, and in that game losing junior Malik Thomas to an ankle injury, we were short-staffed and hurting. Malik is our hardest worker and the engine behind our rebounding and defense. He had to sit out the next two games. On Wednesday night, Feb. 3, we lost a game to Emmanuel Christian, 71–48. We were only down eight points at half but just ran out of steam.

Our toughest test of the season was Friday night, Feb. 5, against the No. 2 team in the conference. We battled hard in the first half but still found ourselves down by 13 at half. We chose to focus on our toughness and try our best to compete. The boys played their hearts out and came back to win 61–48. Cameron Harris had a good night shooting with 12 points, including three three-pointers. Eli Eyrich also attacked the basket with vigor and added 11 points and six assists. Jason Knemeyer added four points and excellent defense. Javas McNair contributed with four points, none bigger than a late three-pointer when the Bulldogs trailed by three. Ethan Knemeyer and Josh Clark logged significant minutes and they all contributed to beat Troy Christian the last time we will face them as a conference foe.

On Monday, Feb. 8, the Bulldogs overcame a sluggish start and eventually overtook Miami Valley at home for their seventh victory of the season. The final score was 52–47.

Over this four-game stretch league-leading scorer DeAndre Cowen has averaged 26.2 points per game even though every defense we play is set up to stop him. He recorded his third-best scoring performance of the season in the Troy Christian game, with 30 points. Sophomore captain Eyrich has averaged over five assists per game during this stretch as well.

The McKinney Middle School coed team had a busy past week playing four games. They split the four games with back-to-back wins and two losses to end their season.

Tuesday, Feb. 2, the Bulldogs traveled to Waynesville for a non-conference matchup. The team started off slow and found themselves down at the end of the first period. However, Alex Van Ausdal provided some spark and strength, driving hard down the lane in the second quarter for nine points to give the Bulldogs a lead at halftime. The Bulldogs came out even stronger from the locker room, putting the Spartans away 40–27. The Bulldogs were led in scoring by Landon Harris, with 19 points. Van Ausdal ended with 10 points, Kayveeyon Wagner added eight and Lacey Longshaw added three.

Coming off the big win against Waynesville, the Bulldogs were matched up with conference rival Troy Christian on Thursday, Feb. 4. The Bulldogs combined for their best, most solid team effort offensively and defensively this season to prevail in a 43–28 victory over a well-regarded Eagle team. The Bulldogs found its boost in this game with Lucas Price scoring a career-high 10 points. Wagner played with a lot of energy and showed his defensive presence by shutting down Troy Christian’s big man and adding eight points to the team’s total. Harris demonstrated his composure at guard and knocked down his foul shots in the fourth quarter for a total of 13 points. Van Ausdal and Longshaw also contributed to the win with six points each, along with strong defense and rebounds in the paint.

Unfortunately, the winning streak was halted when McKinney played the very next evening against a strong Dayton Christian team. Coming off an exciting win, the Bulldogs never quite found their groove Friday evening and lost 46–22. Scoring on the evening were Harris and Van Ausdal with seven points each and Wagner and Price with four each.

Sadly, the Bulldogs’ season came to an end on Monday, Feb. 8, as the coed team faced Troy Christian again in the first game of the Metro Buckeye Tournament in Troy Christian’s own gym. The Eagles came out with a solid defensive game plan after facing us just a few nights ago and held the Bulldogs to their lowest score of the season. The McKinney team found itself down 12 points at halftime. The Bulldogs showed some determination in the second half, with Wagner making some big shots to cut the deficit down to four with just four minutes left. Then Troy Christian had a few made shots and McKinney missed a few opportunities, eventually ending the game and their season with a 34–20 loss. The Bulldogs showed great effort, although the intense week of games took a toll on the players. Scoring in the last game was Wagner with eight points, Van Ausdal with six, Harris with four, and Price with two. Even with the disappointing loss to end the season, the players were appreciative of the opportunity to combine as a coed team and take the floor this season despite the pandemic.