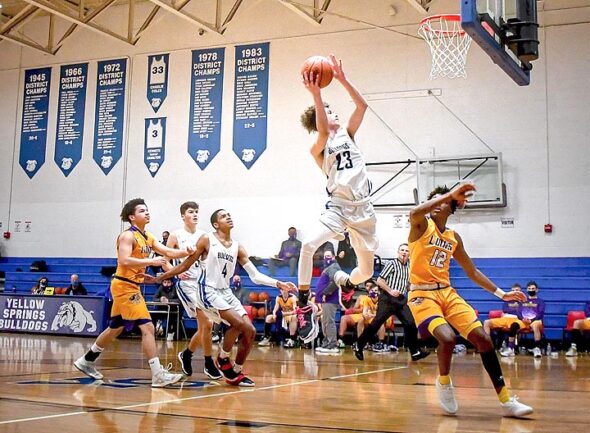 Earlier this month, Yellow Springs High School varsity basketball standout DeAndre Cowen leaped above an Emmanuel Christian defender during a 71–48 home loss. The freshman scored 29 points in the game. He leads the league in scoring, with an average of 20.9 per game as of this week. (Submitted Photo by Michael Knemeyer)

There were no YSHS girls basketball games over the last week.

The Yellow Springs High School boys varsity basketball team faced off against the Northeastern Jets on Feb. 10 before challenging Xenia on Feb. 13. Against the Division I Xenia Buccaneers, the Bulldogs battled well but ultimately lost, 76–67. No score was reported in the Northeastern game.

Sophomore Krishan Miller finished 48th out of 142 bowlers, a performance good enough to qualify for districts. Miller bowled games of 176, 201 and 150, averaging 176 across the three games. The Bulldogs did not move on as a team.

Fellow sophomore Luka Sage-Frabotta came in 96th place with a 145 average. Senior Finn Bledsoe ended his YSHS bowling career with a 106th place finish, averaging a score of 134 across three games. Not far behind at 108th and 109th place were junior Max Sturgeon, 129 average, and senior Ivan Spar, 126 average.

Miller’s results from the Southwestern District Division II tournament, held on Tuesday, Feb. 16, at Beaver-Vu Lanes, were not released by press time.