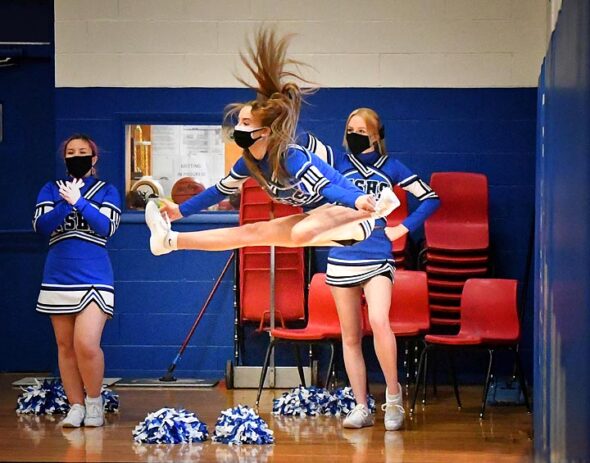 Yellow Springs High School cheerleader Ava Schell appeared to effortlessly elevate herself in support of the girls basketball team during a home game on Jan. 24. The local cheer squad started cheering at girls home games, in addition to all boys games, in 2018. (Photo by Michael Knemeyer)

For the Yellow Springs High School boys basketball program, last week was a busy one. The junior varsity team got its first win, over Miami Valley School, on Wednesday, Jan. 27. The varsity squad went on to win its game that night as well, 55–45.

On Friday, Jan. 29, the varsity fought hard against Dayton Christian, but ultimately fell to the Warriors 53–41. The very next night the Bulldogs faced off against the No. 1 team in the conference, Legacy Christian Academy. The Knights went down early, 11–2, to Yellow Springs but the Bulldogs ran out of steam late in the game. The score was tied at 36 halfway through the third quarter. Legacy Christian went on a long run to finish the game out with a  61–47 victory. The game featured a bucket by Josh Clark and first time varsity minutes for freshman Isaac Grushon.

Over the past week, DeAndre Cowen has led the Bulldogs, averaging 26 points per game. Captain Eli Eyrich has also been playing well, dazzling the limited crowds with behind-the-back passes and no-look passes as well as scoring 10 points against Miami Valley. Junior Malik Thomas averaged around 10 rebounds per game in the past week as well.

Girls basketball gets to 10 wins

The YSHS girls varsity basketball team beat conference foe Dayton Christian in a close game, 42–39, on Thursday, Jan. 28. The new record comes to 10–3 on the season and 3–3 in the conference.

The game was tied at 11 at the end of the first quarter. The Bulldogs were able to take the lead and go into halftime ahead. Angie Smith led with 22 points and added six assists and four steals. Corrine Totty contributed seven points, 12 rebounds and three steals. Aaliyah Longshaw finished with five points, eight steals and nine rebounds. And Annlyn Foster and Haneefah Jones ended with four points and nine rebounds apiece.

On Sunday, YSHS received the No. 5 seed in the Ohio High School Athletic Association tournament, which is the highest seed the team has received since at least 2017. The Bulldogs also attained a team GPA of 3.82 for the entire first semester.

The McKinney Middle School co-ed basketball team faced a challenging Emmanuel Christian team for the second time this season, on Thursday, Jan. 28. The Bulldogs started off slow and allowed the Warriors to build up an early lead. The Bulldogs found themselves at the foul line often in the contest. However, they were unsuccessful at converting the shots, going just 3–14 from the line. The team continued to battle, but struggled to keep up and fell 42–27. Kaveeyon Wagner and Landon Harris each had 12 points on the night while Alex Van Ausdal added three points. The McKinney team will wrap up its season with a tough week against Waynesville, Troy Christian and Dayton Christian before tournament play.

The Yellow Springs High School bowling team faced Legacy Christian Academy on Monday, Feb. 1, at Beaver Vu Lanes for its final regular season match. The Knights defeated the Bulldogs by 178 pins. It was another hard-fought match, and the boys played strong until the end. Individual performances were:

Next up is the Metro Buckeye Conference Championship on Saturday, Feb. 6, at Poelking Lanes in Kettering. To maintain social distancing, only one spectator per bowler will be permitted to attend the conference tournament. On Feb. 10, the team will travel to Marian Lanes in Huber Heights to compete in the sectional round of the OHSAA tournament. No spectators will be permitted.