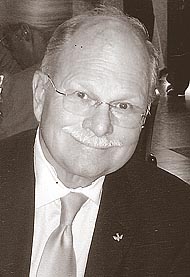 Bill (William Cathcart) Scott died at home at 2 a.m. on Thursday, Feb. 11, 2021. He was 85 years old. His wife of 51 years, Dorothy O., and a wonderful VITAS Hospice nurse, were at his side to ease his passage. During his last days, family and friends had the opportunity to say goodbye, in person and via FaceTime. Our profound sorrow is tempered by the knowledge that he has been released from the grip of Alzheimer’s and the accompanying debilities.

Bill was born in Philadelphia, Pa., the third child of deaf parents. He graduated from Germantown High School in 1953, but not before winning a citywide yo-yo contest and breaking both wrists on the parallel bars. He enlisted in the Army in 1955 and served in Paris at Headquarters EUCOM as a cryptologist. He was awarded a football scholarship to Central State University and played tailback for the CSU Marauders. He graduated in 1962 with a Bachelor of Science degree in business administration, and always expressed gratitude for his professors there, including the late Dr. Shelbert Smith.

Following graduation, one of his earliest jobs was as an investigator for the Retail Credit Company. He moved on to practice his true gift — sales. It’s been said he was a salesman by birth and by trade. He sold advertising for Springfield radio WIZE, for Dayton radio WDAO, and for Springfield TV WSWO.

In 1971, Bill joined the original team of Magazine Networks, Inc., or MNI, a company that pioneered the sales of local advertising in national magazines, including Time, Newsweek, Sports Illustrated and U.S. News and World Report. He successfully opened the Ohio markets in Dayton, Columbus, Cincinnati and Toledo; Indianapolis, Louisville, Lexington and West Virginia markets soon followed. For 29 years, Bill was recognized as a top producer, mentor, creative problem solver and professional exemplar. MNI was acquired by 3M in 1977, and in 1985 Bill was named senior account executive, “the highest and most coveted sales position within 3M, afforded to the top 5% of all 3M sales people worldwide.”

Bill was an avid sportsman all his life, excelling at gymnastics, basketball and football in his youth. As an adult he focused on tennis, golf and fly fishing, and weekends would find him at the Antioch tennis courts, a local golf course, or Spring Run Farm Trout Club. He also loved woodworking and used his workshop to build furniture and to teach his sons wood crafts that became Christmas gifts.

Bill was an enthusiastic volunteer. He loved people and he loved Yellow Springs. Over the years, he coached community soccer and the nascent high school football team under the leadership of Fritz Leighty, and he was one of the earliest coaches for Perry League T-ball for many years. He was a major fundraiser for what became the swimming pool at Gaunt Park, and lent that same effort in the fundraising to renovate the Antioch College tennis courts. For several years, he and his late brother-in-law, Cy Tebbetts, headed up the annual tennis tournament to benefit Chamber Music Yellow Springs.

Bill served as chair of Community Council; in Dayton he served on the Board of United Cerebral Palsy — now United Rehabilitation Services — and went on to serve as president of the Gorman-Hewitt-Ayars Fund of URS. Finally, Bill was a committed volunteer for the Yellow Springs Senior Citizen Center and was recognized in 2014 by the Greene County Council on Aging for his years of tireless service.

Bill’s totems were the earthbound Bear and the high-flying Eagle. His guiding principle was persistence: “Press on. Nothing in the world can take the place of persistence. Talent will not; nothing is more common than unsuccessful men with talent. Genius will not; unrewarded genius is almost a proverb. Education alone will not: the world is full of educated derelicts. Persistence and determination alone are omnipotent.”

One Response to “William C. Scott”