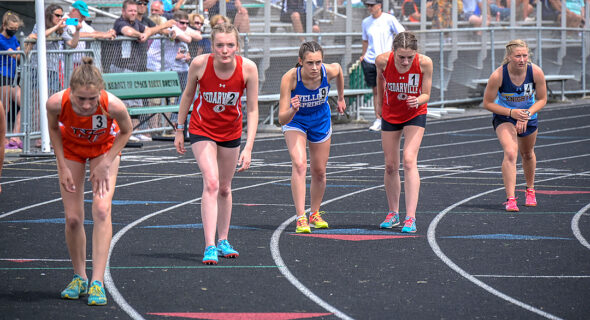 YSHS track runner Cheyan Sundell-Turner, center, was focused on victory as she lined up in the 3,200-meter race at the Division III district meet on Saturday, May 22. The sophomore ran to a first-place finish in the event, in 12:25.18, earning her a trip to regionals. (Photo by TJ Turner)

Athletes move on to regionals

The YSHS boys and girls track and field squads performed admirably at the Division III district meet held Saturday, May 22, at Northmont High School in Clayton. The top four finishers in each event from the district competition qualified to compete at the regional meet, scheduled Wednesday, May 26, at Troy Memorial Stadium in Troy, and a handful of Bulldogs made the cut.

Senior Haneefah Jones was crowned the district champion in the long jump as she outclassed the field with a first-place jump of 16’3½”. Sophomore Cheyan Sundell-Turner battled the heat but outpaced the field on her way to victory in the 3,200 (12:25.18). Senior Annlyn Foster ran a personal best time in the 100 hurdles (15.88) with a runner-up finish. The girls 400 meter relay team of Jones, Malaya Booth, Avery Reeder and Foster ran a season best time (52.86) for a hard-fought second-place finish. Rounding out the girls squad in qualifying for the regionals was Booth in the 100 meters (13.67), by finishing fourth. Reeder had a season best run in the 300 hurdles, with a sixth-place finish, while Jones earned a seventh place on the high jump, and Foster placed eighth in the shot put. Other strong performances were achieved by Devyn Deal, Kayla Ross and Marin Wirrig.

Yanne Gilley led the boys team, earning a trip to the regional meet in the long jump, where he finished second (19’3½”), and narrowly missing competing at regionals in the 200 meter dash, finishing fifth. The 400-meter relay team of Liam Hackett, Griffin Roberts, Malik Thomas and Gilley finished in ninth place. Noble performances were turned in by Gideon Nazriri, Sven Meister and Rilo Oberg.

Coaches Isabelle Dierauer and John Gudgel noted the awe-inspiring performances during the latter part of the season with the Bulldog Invitational, Metro Buckeye Conference League Meet and the district meet. They are excited about the regional contest as several Bulldogs are on the cusp of qualifying for the state meet.

The 2021 baseball season for the Yellow Springs High School Bulldogs came to an end Tuesday, May 18, with a loss against the Cedarville Indians at their home field. As is typical for this time of year, the sectional tournament game had been postponed from the day before because of rain and the resulting field conditions.

The faithful Bulldog fans came out to support the team and were treated to the best weather of the year. Unfortunately, the Indians did not treat the team with the same pleasantries, as they were intent on ensuring they made it to the second round of the tournament.

Pitchers Joshua Clark, Sam Miller and Isaac Grushon battled the solid hitting squad, but the Bulldog bats were not enough to keep up. Grushon had a hit with an RBI and Miller added a walk. In his last game as a Bulldog, senior Blaine Baker had a fine game behind the plate and added a hit of his own. Sophomore Krishan Miller had a hit, a walk and a fine running catch into deep left field. The bases were loaded so the catch saved 2-3 runs. Sophomore JP Anderson had a solid double and came awfully close to making a great diving catch in right field. Head coach Mitch Clark said that the outfielders worked hard in the days leading up to the game, practicing their diving.

“JP’s desire and practice were evident on that play as he came up just short of making an amazing grab,” Clark said.

Junior Noah VanHoose started at third base and crushed a double at bat.

“That was the hardest hit Noah has had all year and was a direct result of the hard work he has put in on his swing during practice,” hitting coach Phil Renfro said. “I see big things for him next year.”

The Bulldogs have scheduled their end-of-year awards presentation for Friday, May 28, to culminate the official activities for the 2021 season.