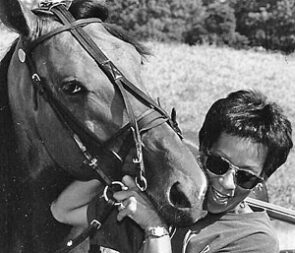 D’Vita L. (Peterson) Franklin, of Xenia, passed away peacefully Friday June 4, 2021, in the care of Hospice of Dayton. She was 68.

D’Vita was born Nov. 6, 1952, in Yellow Springs, Ohio, the daughter of Robert Peterson and Shirley Peterson (House) Turner. D’Vita was a 1971 graduate of Yellow Springs High School. After high school, she had various jobs, including a short stint with Morris Bean Company.

Those closest to her knew her passion was for the standardbred horse racing business. Shortly after leaving Morris Bean, she devoted her career to owning, training and care taking standardbred horses. Over the years, she worked closely with her dad, Robert Peterson; uncle, Michael Peterson; friend and associate, Sam “Chip” Noble; and last — but not least — her husband of 37 years, Jack Franklin.

D’Vita had many accomplishments, including — but not limited to — setting the Greene County Fair track record driving her own horse, Raceway Time; caretaker for Hambletonian qualifier Vaporizer; Little Brown Jug elimination winner Metropolis; and nationally known stallion Nobleland Sam. She was a well-known and respected member of the United States Trotting Association and Ohio Harness Horsemen’s Association, as well as a lifetime and active member of St. Paul AME Church in Cedarville, Ohio.

D’Vita loved her family and was a devoted friend. She was a foster parent to several teens and infants. She loved spending her spare time around horses. D’Vita was an avid fan of the Little Brown Jug, she loved reading a good novel, and watching her Westerns and horse racing on TV. D’Vita impacted a multitude of lives, both personally and professionally, and while she will forever be deeply missed, her impact will never cease.

D’Vita is survived by her husband of 37 years, Jack Franklin; her daughter, Jayona Franklin,  and granddaughter, Zylla; stepson, Aaron Cosby; a special nephew, Phillip Collett, who she raised as her own; her mother, Shirley Turner; stepmother, Ruth Miner Peterson; her sister, Robin Walker; her brothers, Marshall and Tyron Peterson; and a host of aunts, uncles, nieces and nephews.

She was preceded in death by her father, Robert Peterson; stepmother, Mary Peterson; her brother, Erwin Peterson; her grandparents and several aunts and uncles.

Cremation rites have been accorded. A celebration of life service will be held Monday, June 21, 2021, at 2 p.m. in the dining hall of the Greene County Fairgrounds, located at 120 Fairground Road in Xenia. Arrangements entrusted to Porter-Qualls-Freeman Funeral Home.