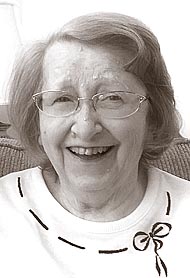 She was a fifth-generation daughter of Adams County, born March 28, 1939, to Willard Orr and Helen Hope (Carroll) Williams in Seaman, Ohio. Carol attended Asbury College in Wilmore, Ky., where she met and married Gene Snodgrass in August 1963. After her graduation, they moved around the country, making homes in Hopewell Junction, N.Y.; Bovina, Texas; Yellow Springs; and Fort Mill, S.C.

Carol made friends quickly in the Hopewell Junction apartment community during Gene’s time working for IBM. Later, they moved to Bovina to work with Gene’s dad on the family farm. During the years in Texas, their son Kellis was born. Then, they moved to Cedarville when Carol’s mother needed assistance after a heart attack, moving in during her recovery. They settled in Yellow Springs when her mother gained independence.

Living in Yellow Springs for eight years, Carol was active in the church at Yellow Springs Christian Center, where she made lasting friendships with the late Pastor Ray Tyson, Lois and Dudley Bravard and Diane and Pepper Goslin.

In 1986, the family moved to Fort Mill to enjoy warmer weather. Carol was proud to work with her dear friends Dot Scott and Carolyn Bryce; as usher for the PTL program and summer Passion Play; as visitor center concierge at the New Heritage USA resort; as co-manager at the resort waterpark and Christmas light show; and also volunteering for other events in the area.

The couple returned to Wilmore in 2015 to live at Wesley Village senior living center after Carol suffered a series of strokes.

She was preceded in death by her parents; her older brother, Norman Orr Williams; and her baby sister, Sherry Lynn Williams Johnson.

Carol is survived by her husband of 58 years, Gene, of the home; her son Kellis (Steven), of Lexington, Ky.; her siblings, Bill (Bonnie) Williams, of Jamestown, Ohio, John Williams, of Cedarville, and Patty Faires, of Athens, Ohio; sister-in-law, Sue Williams, of Aguanga, Calif.; brother-in-law, Jim Johnson, of Cedarville; and numerous loving cousins, nieces and nephews.

Interment will be in Tranquility Cemetery outside Seaman. Services to be prepared at a later time. Please email casnodgrasssvc@gmail.com for updates.