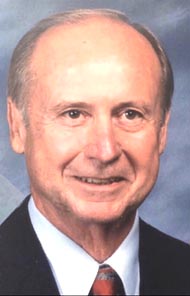 Bud was born on June 30, 1930, in Greenville, Ohio, to Raymond and Leah Patricia Weaver. He graduated with the class of 1948 from Bath High School in Fairborn, where he excelled at tennis and played the trombone in the school band. He attended the University of Dayton where he received an undergraduate business degree. Bud then enlisted in the U.S. Army and served two years at bases in El Paso, Texas, and Washington, D.C. He went on to receive a graduate business degree from Michigan State University.

Bud began his grocery career as a teenager and later proceeded to management positions while employed at Eavey’s and The Kroger Company. In 1970, he became the owner of Weaver’s SuperValu store in Yellow Springs until his retirement in 2001.

Bud was an avid player of tennis, which he enjoyed from his high school days until a few weeks prior to his 91st birthday. He won several championships and enjoyed the many friendships he made through his favorite sport. Bud also enjoyed extensive traveling with his wife, Betty, which included destinations of Portugal, Italy, Switzerland, Morocco and Brazil. Their favorite winter retreat was along Florida’s Emerald Coast at Tops’l, a tennis resort in Destin.

Bud was also fond of his bridge group, Dayton area Jaguar club and his membership at Xenia United Presbyterian Church.

A celebration of life will be held sometime after COVID restrictions are lifted. If desired, memorial donations may be made to the Hospice of Dayton, 324 Wilmington Ave., Dayton, OH 45420; or Xenia United Presbyterian Church, 343 W. Ankeney Mill Road, Xenia, OH 45385.