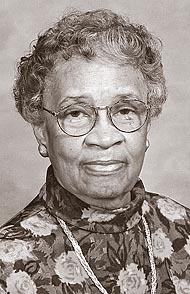 Mary Sylvia Ware was born in Tuscaloosa, Ala., to William and Harriet Gooden on Aug. 11, 1922. Mary passed away into the Lord’s care at the age of 99 on Feb. 7, 2022, at Friends Care Community in Yellow Springs.

After her parents died at a very young age, Mary was raised by her older sister, Annette, along with her younger sister, Bennie. After residing in Tuscaloosa for some time, the family moved to Cleveland, Ohio, in 1942.

Later, Mary relocated to Springfield, Ohio, and soon thereafter she moved to Yellow Springs, where she subsequently met and married Arthur Ware, Jr., of Xenia. They remained a loving couple for over 40 years until Arthur preceded her in death in February 1990.

Early in her life, Mary accepted Jesus Christ as her Lord and Savior and joined the First Baptist Church of Yellow Springs, where she served on the Usher Board. She later joined and became a very active member of Second Baptist Church of Springfield, Ohio where she served on the Usher Board, as a member of the church’s board of trustees and as a deaconess.

In addition to her church activities, Mary was also an active and respected member of the Order of the Eastern Star, Prince Hall Affiliation, for over 53 years. She was also a member of the Retirement Set of Springfield, Ohio, and National Council of Negro Women, Inc.

Preceding her in death was her older sister, Annette Norfleet, of Cleveland, Ohio, and younger sister, Bennie Strickland of Lynwood, Calif. She leaves to cherish her memory and mourn her passing a sizable host of family, close friends and loved ones, all of whom she cherished very much.

Service for Mary Ware will be held Thursday Feb. 17, at Second Baptist Church, located at 615 South Wittenberg Ave. in Springfield. Visitation will be held from 9:30 a.m. until the time of service at 10:30 a.m., with the Rev. Carl Hutchins officiating. Interment will follow at Dayton National Cemetery, Dayton. Social distancing protocol will be observed, and face masks will be required.
In lieu of flowers, the family has requested that donations be made to Second Baptist Church, or Eastern Star, Xenia Chapter #2, 490 Georgia Dr., Xenia, OH, 45385.