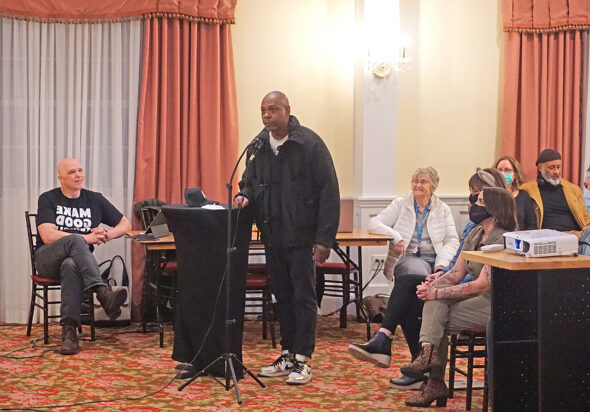 Around 50 villagers gathered in the ballroom at the Mills Park Hotel to participate in the Monday, Feb. 7, Village Council meeting discussion and vote, via Zoom, on a rezoning of the Oberer development at the south end of town. Pictured above at the microphone was local resident and comedian Dave Chappelle, chief among those opposed to the rezoning. (Photo by Reilly Dixon)

At the Monday, Feb. 7, Village Council meeting, held virtually via Zoom, a request from Oberer Development Company to rezone 52.6 acres on the south end of the village as a planned unit development, or PUD, did not receive enough votes to move forward.

With the PUD option off the table, Oberer is expected to develop the land under the current R-A zoning, which features only single-family dwelling units.

The ordinance to rezone the land failed to pass after a 2–2 vote, with Council President Brian Housh and member Marianne MacQueen voting for the measure and Council members Lisa Kreeger and Carmen (Lee) Brown voting against it.

Council Vice President Kevin Stokes, who lives adjacent to the land in question,  recused himself from the vote and any discussion of the project during Council’s session.

Monday’s vote was the culmination of several years of work and discussions between Village Council and administration, a small group of villagers and Oberer representatives and developers.

Had Council approved the ordinance, a PUD would have allowed for a variety of dwelling units, including townhomes, duplexes and single family homes. Also, under a PUD designation, Oberer would have created a public park and several water detention and retention ponds. Additionally, land would have been donated to the Village to develop its own affordable housing.

A similar piece of legislation was brought to Council on Dec. 6, but the measure was tabled before Council took a vote. At the time, Council had concerns about the application and asked for a more detailed traffic study and a copy of the environmental analysis, among other information requests. Council proceeded to schedule two meetings with Oberer representatives: the first, a meeting between Council and Oberer; the second, a town hall style meeting where villagers could directly address Village Manager Josué Salmerón and Oberer representatives.

Council heard a first reading of the final measure on Tuesday, Jan. 18, but decided not to vote formally until the second reading of the ordinance, citing a need for additional information.

After hearing 10 letters in opposition to and three letters in support of the PUD at Monday’s meeting, Council opened the public hearing.

About 50 villagers in opposition to the PUD proposal gathered at Mills Park Hotel to watch the meeting and voice concerns with the proposal, a gathering organized by a newly formed political action committee, Resident Activism Yellow Springs, or RAYS. Thus far, the group’s primary mission has been to oppose the move to redesignate Oberer’s land as a PUD.

Vocal opponents to the land’s rezoning were in attendance, including local resident Dave Chappelle, who said that he would divest from the community should Council pass the legislation.

A number of the PUD’s opponents said that the environmental review was not sufficient, alleging that there was a dump on the property. Village native and architect Max Crome, who grew up near the property, remembers a dump having once been on the property. He and others expressed frustration over several environmental concerns, which they felt had been ignored by Council and Oberer.

“It’s extremely offensive to me when you try to sweep my environmental concerns under the rug,” Crome said to Council.

Former villager Jamie Fine supported claims that the site had been used as a dump.

“I spent time playing on that land … and I do recall that it was a garbage dump,” Fine said.

Villager Matthew Kirk, who was a part of the negotiation meetings between the Village and Oberer, said he believes a single-family development would attract younger families.

Sharing his sentiment was former Village Council member Laura Curliss, who voted for rezoning the property as a PUD when she was the Council liaison for Planning Commission.

Several speakers questioned whether the development as proposed would help with the lack of affordable housing in the village. Villager Jonny Dread said that the price points for the proposed development would continue to make Yellow Springs unaffordable.

“The community I know has been slowly priced out,” he said. “I think we have enough intelligence among us; we can do better.”

While the majority of speakers were opoposed to the proposed development, several villagers spoke in favor of the PUD proposal.

Ellis Jacobs said he supported the PUD because it included land set aside for affordable housing.

“In the absence of something better we need to look seriously at what’s on offer,” Jacobs said. “Sometimes a bird in the hand is better than two in the bush.”

His sentiment was echoed by Eve Fleck, who lives near the development, and Patricia Brown, who owns a home in a PUD. Both Fleck and Brown said they believed the PUD was the better option.

“I live in a PUD now,” Brown said. “We have very expensive houses, we have Home, Inc. houses, we have medium houses; we all get along and we all love each other. A community that has all of this stuff is much better than one that only has one part of it. Vote for the PUD, please.”

After over an hour, Housh closed the public hearing and turned the floor over to his fellow Council members.

Prior to the vote, Kreeger proposed two modifications: a new site plan with options for smaller homes integrated into the development, a deeper look into the environmental analysis and a better validated and better communicated cost-benefit analysis.

“It never hurts to have more scrutiny and a more comprehensive understanding to ensure that we have the best and most accurate models,” she said.

Kreeger’s requests for modifications did not receive a second. Ultimately, the vote was a tie. MacQueen and Housh voted “yes,” saying that they believed the plan would benefit the village as a whole.

“I hope that this doesn’t have to remain divisive,” Housh said. “I hope we can get beyond and truly work together to benefit everyone in the village.”

“Having been in the community for 50 years, I know that life doesn’t follow in a straight line and there are all sorts of things that can happen,” MacQueen said. “While this isn’t what I would design as a project, I actually have a fair amount of hope and can see some positive outcomes.”

Council members Brown and Kreeger voted “no,” citing concerns for affordability. In a follow-up interview, Kreeger said that she voted no because of unaddressed environmental concerns and a desire to see a site plan that was more consistent with village needs.

“I really hoped that, rather than just the ‘no’ vote, Oberer could have had the option to bring forward a different site plan,” she said.

In a phone interview after the meeting, Brown said that she had concerns about who would find the development affordable.

“I think about the majority of people who voted for me and have expressed concerns and asked that same question,” she said. “As of last night I didn’t have an answer.”

Calls to Oberer to comment on their next steps were not answered as of press time.

Kreeger said she hopes that a single-family development allows families to purchase homes without driving up prices of current housing stock.

“A compelling point was made that there are people who live in Yellow Springs and don’t want to take on the lift of renovating a house,” she said. “I think that new housing stock is good, and I wish they [Oberer] would consider some smaller options.”

Additional business from the Feb. 7 Council meeting will be covered in next week’s edition of the News.