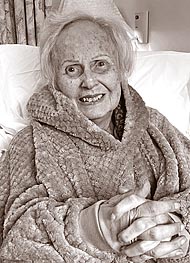 A brief memorial service and luncheon celebrating the life of Grace Darling “Bambi” (Nelson) Williams was held Wednesday, April 27, 2022 at the Mills Park Hotel in Yellow Springs, with the Rev. Daria Schaffnit officiating. The eulogy was given by Dr. Alphonso Smith, professor emeritus at Wright State University, and a family tribute was given by Sarah Whitledge Taylor, national first vice president of the American Gold Star Mothers, Inc.

Bambi died early Sunday morning, March 13, 2022, at Friends Care Community, following a week-long hospital stay in mid-January, and then a two-month battle with the devastating cardiac and pulmonary aftereffects of COVID-19. The photo at right was taken at Friends Care Community on Jan. 21, the day after returning from the hospital. At Friends Care, Bambi was fortunate to be able to die in familiar surroundings, tended to by loving and devoted family, friends and caregivers, including a cardiac and COVID specialist from Hospice of Dayton.

Bambi was born in 1932 in Philadelphia, Pa., to Theodosia Darling (Seibold) Nelson and William George Nelson Jr. She grew up in Roanoke, Va., in a loving family where she was the youngest of six children, her own mother having married for the first time to a widower with four older children.

She and her youngest sister, Teddy, both attended Roanoke’s Jefferson High and then went on to Denison University, in Granville, Ohio. Bambi graduated from Denison in 1953 with a degree in sociology and double minors in psychology and philosophy.

During her studies at Denison, Bambi met both her first and second husband, Dr. Francis Trueman Williams, Jr., known locally as Frank. Bambi and Frank married for the first time on Sept. 11, 1953, remained friends and co-parents for 18 years following an amicable dissolution in 1985, and then remarried at Hospice of Dayton four days prior to Frank’s death on March 23, 2002.

Always a devoted champion of children, women, elders and the most vulnerable members of our society, Bambi continued her studies at Roanoke College, Antioch College, Wittenberg University and the Ohio State University, earning several certifications in elementary education. While Frank was earning his Ph.D. at OSU, Bambi first worked as the sole proofreader for Nationwide Insurance in downtown Columbus, then taught third grade at Hilliard Elementary in 1956, and served as the children’s librarian at Tremont Elementary and Upper Arlington from 1957 to 1958.

Upon moving to Yellow Springs in 1958, when Frank joined the science faculty as an organic chemist at Antioch College, Bambi and Frank noticed, like legions of other hopeful Yellow Springers both before and since, that the village had a housing shortage. Faced with few options for where to live, they first rented one of the twin duplexes on West North College Street, then built a small brick ranch in the then-brand new subdivision known as Fair Acres, on the north end of town. Serving first as a substitute teacher, and then full-time, Bambi taught kindergarten at Mills Lawn from 1959 until her own children came along.

After moving to 210 Gardendale Drive, Bambi and Frank were finally able to achieve their dreams of becoming parents through Montgomery County Children & Family Services, where they first adopted their daughter, Sam (originally named Stephanie), at age 13 months, in 1962; then their son, Whit, at age 6 months, in 1964. They traveled widely, spending Frank’s sabbaticals in Midland, Mich.; London, England; and Tübingen, Germany in the ’60s and ’70s.

Having discovered a love and a knack for introducing incoming faculty wives to the village, Bambi first earned her real estate license in 1971, and a lifelong career was born. Bambi worked for Dunphy Real Estate and then Sanford Realty before joining Roth Realty and earning her broker’s license in order to open the Yellow Springs offices of Roth’s Gallery of Homes. Later she joined Heritage Realtors, which eventually became Coldwell Banker Heritage, from which she retired as a licensed broker associate and associate partner. In 2011, she was awarded the status of Realtor Emerita from the National Association of Realtors. Over the years, she made great use of her teaching skills by patiently and kindly training numerous incoming Realtors, including her own daughter, Sam, who joined her in business in 2004. She also performed many hours of community service and served on numerous boards, including the Antioch School, the Yellow Springs Library Association, the Glen Helen Association, Easter Seals, Planned Parenthood and Zonta International, among several others.

Throughout her 89 years, Bambi cherished her time spent with family and friends. She loved to travel, both nationally and internationally, visiting the Caribbean, Key West, Ireland and, quite frequently, Pelee Island with her best friend and constant companion from 2002 onward, Bob Baldwin. Several other family trips she considered highlights were visits to Europe, Australia, Japan and Thailand. She also enjoyed attending several Gold Star Mother’s Weekends in Washington, D.C., where her beloved maternal grandmother, Grace Darling (Whitaker) Seibold — for whom Bambi was named — originally founded the American Gold Star Mothers, just four years before Bambi was born.

Surviving are Bambi’s sister-in-law, Jennie Anita (Westlake) Findley, of Flemington, W.V.; daughter, (Stephanie) Samantha Williams Eckenrode, of Yellow Springs; Frank Whitaker “Whit” Williams, of Clifton; granddaughter, Miriam Eckenrode Saari, and her husband, Aaron, of Cincinnati; and grandson, William Polo Chaikwang, of Yellow Springs. She also leaves behind dear friends Bob Baldwin, Betsy Whitney, Nina Myatt, and Phyllis Logan; as well as a whole host of other extended family members, surrogate family and beloved Friends Care Community friends and caregivers. Bambi was a delightful spirit, with an endless “attitude of gratitude,” and a consistently peaceful and positive personality. Deeply loving and kind, she maintained a profound sweetness all her life, and was a bright light upon this earth. Perfectly named, she was gracious, darling and very much a “dear.”

In addition to her parents and five older brothers and sisters, Bambi was preceded in death by her husband, Frank, and her son-in-law, Eddie Eckenrode.

In lieu of flowers, memorial contributions may be made to the American Gold Star Mothers, Inc, 2128 Leroy Place, NW, Washington, DC 20008; Planned Parenthood; the Yellow Springs Community Foundation; or the Glen Helen Association. Online condolences may be expressed at Conroy Funeral Home’s online site, or by emailing info@conroyfh.com.