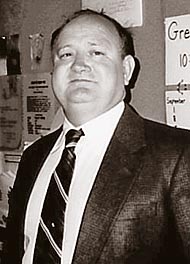 Danny Joe Campbell, of Enon, passed away peacefully on Friday, July 15, 2022, at Wickshire Senior Living. He was 75.

Danny served in Vietnam on the USS Kennebeck and was honorably discharged from the United States Navy. Unfortunately, his service in Vietnam exposed him, and many others like him, to Agent Orange. Because of this, he developed the life-altering Parkinson’s Disease, which slowly robbed him of function and sanity, but he still had his quips and coy comebacks at hand.

Danny and Carol gave many hours to help with Honor Flight in its early days. They assisted veterans on the flights and helped in the office with phone calls, helping with ordering, packing up and sending shirts and jackets to help raise money for the trips. They were both very proud and honored to spread the word and work of Earl and Jeff. Danny was a local 402 member and retired from Navistar after 30 dedicated years to become a doting grandpa babysitter to his grandchildren.

A visitation was held on Saturday, July 30, at Jackson Lytle and Lewis Funeral Home in Yellow Springs. He was laid to rest in Enon Cemetery with military honors.

Condolences may be forwarded to the family by visiting http://www.jacksonlytle.com.