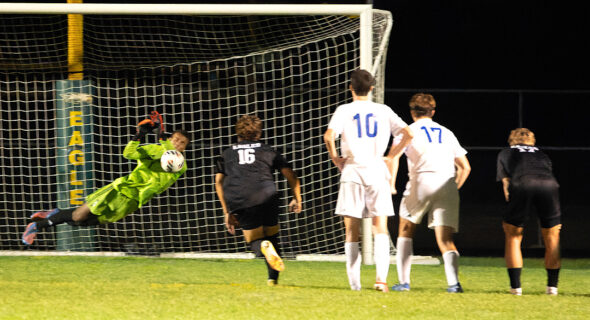 With just three minutes to go in the YSHS Boys varsity soccer game against Troy Christian on Tuesday, Sept. 6, senior goalkeeper Krishan Miller stopped a penalty kick to keep the Bulldogs’ 2–1 advantage. The ’Dogs then ran out the clock to win and remain undefeated. Both teams are ranked in the top five locally. (Submitted photo by TJ Turner)

The McKinney Middle School and YS High School boys and girls cross-country teams had a banner moment at the 58th Annual Brookville Cross Country Invitational last Saturday, Sept. 10, as more than half the Bulldogs ran personal bests in this large meet of more than 25 teams.

Cheyan Sundell-Turner improved her performance from last year by one spot, which placed her first among 157 runners as she navigated the 5,000-meter course in a season best time of 20:41, earning the gold medal. She was ably complimented by ninth-grader Sasi Drees-Johnson (42nd), fellow senior Josie DeWine (44th), sophomore Lidija Lackovich-VanGorp (93rd) and ninth-grader Rebecca DeWine (95th) as they finished in seventh place out of 27 schools.

Coaches Isabelle Dierauer, Peter Dierauer and John Gudgel were complimentary of the total team effort and competitive spirit that was on display by all the runners in this highly competitive meet.
—Coach John Gudgel

The volleyball team netted two wins against one loss last week, falling to Carlisle on Wednesday, Sept. 7, and besting Middletown Christian and Northeastern on Thursday, Sept. 8, and Saturday, Sept. 10, respectively. All three were away matches.

The match against Carlisle was a close one, with the Bulldogs winning the first set and trailing narrowly for the final three. Junior Ella Laws was the leader for kills during the match, racking up nine, followed by eight from sophomore Lacy Longshaw, six from senior Josephine Zinger, four from sophomore Adeline Zinger and three from senior Vivian Brya. Adeline Zinger led the match for digs, netting 20, with Babb bringing in 16, 13 for Longshaw and Bryan, nine for Laws and eight for Josephine Zinger.

The team fared better against Middletown Christian, beating them 3–1. Longshaw dominated the court with a whopping 24 kills, which were rounded out with seven from Adeline Zinger, two each from Bryan and Josephine Zinger and one each from Laws and freshman Malayna Buster.

Adeline Zinger was the heavy-hitter for digs, racking up 33, followed by 15 from Bryan, 14 from junior Violet Babb, 10 From Josephine Zinger, nine from Longshaw, three from Laws and one from Buster.

The team’s current record is four losses and four wins. Their next matches will be against Emmanuel Christian on Thursday, Sept. 15, at home; and Dominion Academy on Saturday, Sept. 17, away. Both matches begin at 7 p.m.

The boys soccer team brought home its fourth win on Tuesday, Sept. 6, triumphant 2–1 over Troy Christian at an away match.

Seniors Eli Eyrich and Dylon Mapes landed a goal each to keep the Bulldogs in a narrow one-goal lead over the opposing team. With three minutes left in the nailbiter game, Krishan Miller leapt to save a penalty kick from Troy, shutting the opposition down; the senior goalkeeper netted seven saves over the course of the game. As the clock ran down, the Bulldogs emerged triumphant, remaining undefeated.

As district parent and soccer fan TJ Turner, who captured Miller’s thrilling save on camera, wrote: “The Bulldogs haven’t played [Troy Christian] in several years, but both teams are ranked in the top five locally — a good sign for the rest of the season!”

Stats for the team’s Sept. 10 match against Chaminade-Julienne have not yet been reported.

The Bulldogs will face Legacy Christian Academy at home on Thursday, Sept. 15, and Catholic Central at home on Saturday, Sept. 17; both matches begin at 7 p.m.