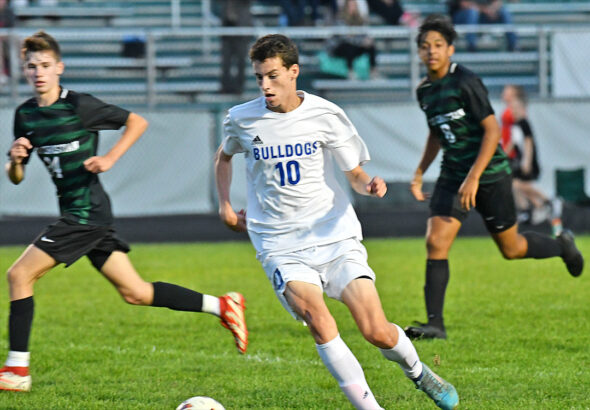 The high school girls team finished in sixth place out of 12 squads and was led by senior Cheyan Sundell-Turner, who ran to a second-place finish in a time of 22:05 while competing against 83 competitors. Ninth-grader Sasi Drees-Johnson ran to a surprising 26th place in a time of 26:49; she was complemented by senior Josie DeWine, who ran 27:58. The depth of the Bulldogs showed with solid efforts by Lidija Lackovich-Van Gorp, Rebecca DeWine, Lauren Finney and Hannah Finney.

On the boys’ side, the eight-member squad ran to a ninth-place finish out of 12 teams. Ninth-grader Kyle Johnston was at the forefront with a 30th-place effort in a time of 21:08. Junior Jack Horvath came in 52nd (22:24), while sophomore Isaac Lewis ran a solid 23:09 with a 67th place. Kyle Raymer and Kael Cooney were followed by first-year runners Arthur Devore, Collin Calfee and Zachariah Richardson.

Coach Isabelle Dierauer noted that more than half of the team improved upon their times from the previous week. The Bulldogs will travel to Brookville on Saturday, Sept. 10, to compete in the Brookville Invitational.
—Coach John Gudgel

The girls soccer team racked up a duo of wins on Monday, Aug. 29, against Trotwood Madison, and Saturday, Sept. 3, against Belmont.

Junior Lily Kibblewhite maintained defense, blocking three goals from the opposing team.
The Bulldogs were at home for the contest against Belmont, securing a 3–0 win. Sophomore Lili Herzog brought in two goals, with Sorenson scoring one.

The two wins temper the team’s previous loss, bringing their record so far to 2–1.

The boys soccer team brought home three wins after facing off against Waynesville on Monday, Aug. 29; Graham on Wednesday, Aug. 31; and Greenview on Saturday, Sept. 3

In their inaugural game of the season, the Bulldogs bested Waynesville away from home, with a final score of 7–0. Seniors Eli Eyrich and Dylon Mapes scored three and four goals, respectively.

The Bulldogs played Graham at home, with a victory of 5–0. Eyrich, sophomore Landon Harris and senior Tallis Onfroy-Curley each scored one goal, with Mapes bringing in two.

The final win against Greenview also took place at home, 7–1. Mapes and seniors Josh Clark and Ben Espinosa all brought in one goal each, with Eyrich scoring four.

Chaiten and Miller again defended against a hail of attempted goals from the opposing team, netting one and six saves, respectively.

The team’s effort at home against Princeton ended with a score of 0–3. Over the course of the match, sophomore Lacy Longshaw racked up seven kills, followed by three from senior Josephine Zinger, two each from juniors Violet Babb and Ella Laws and one from sophomore Adeline Zinger.

Babb led the team for digs with 11, followed by senior Vivian Bryan and Adeline Zinger with seven each, five from Josephine Zinger and four each from Longshaw and Laws.

The team’s home match against Dayton Christian was close, ultimately ending in a loss for the Bulldogs, 2–3.

The Bulldogs were victorious in their away match against Tri-County North, winning 3–0 on Tuesday, Sept. 6. Stats for the match were not available at press time.

The team’s current record is three losses and two wins. The Bulldogs will play the next three matches away at Carlisle on Wednesday, Sept. 7; Middletown Christian on Thursday, Sept. 8; and Northeastern on Saturday, Sept. 10, all beginning at 7 p.m.