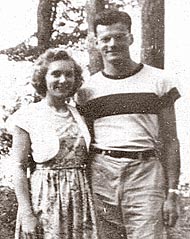 Stanley Harry Fitch and Elaine Ellen Bullock Fitch, of Calais, Vt., were married for 71 years and continued their journey together on Aug. 30, 2022. Thanks to Vermont’s Death with Dignity law, Elaine and Stan died peacefully at home at the time of their choosing. They were surrounded by family who shared memories, tears, laughter, and love and gratitude for one another.

Stanley was born on July 25, 1923, in the farmhouse in Calais, where he spent his entire life. He carried on the tradition of his parents, Clyde and Mattie Fitch, as a dairy farmer. In the mid-1950s, Stan was awarded Outstanding Young Farmer of the Year by the U.S. Junior Chamber of Commerce. An active community member, he served as selectman, justice of the peace and on several boards, including Act 250 Environmental Commission, Robinson Sawmill Association, Maple Corner Community Club and Adamant Cooperative Store. As Mr. March, he was the oldest man in the infamous Men of Maple Corner calendar. He treasured his memories of calling dances at Camp Comfort on Curtis Pond and around the state of Vermont. At the age of 99, when Stan was asked the secret to his long life, he said, “I had a good companion.”

Elaine was born on July 31, 1929, to Mildred and Raymond Bullock of Calais, Vt. She held bachelor’s and master’s degrees from Johnson State College. A beloved educator, she served primarily in Barre (Vt.) City Schools as a teacher and principal. She was involved in the National Education Association and served on the board of Planned Parenthood. Elaine was especially proud that she and Stan served on the first committees to create U32 Jr/Sr High School. Elaine toured the Soviet Union and spent a summer painting landscapes in Umbria, Italy (by herself). A lifelong learner, she studied multiple languages, drawing and painting, becoming an accomplished artist.

As a couple, Stan and Elaine traveled extensively throughout Europe on educational tours. Together they ran the Fitch House Bed and Breakfast in the 1980s and early ’90s, and whether traveling or hosting guests, made lasting friendships, including ties in Yellow Springs, where they visited multiple times with family who live in the village. They were both voracious readers with deep interests in history, current events and political issues; and they were early supporters of civil unions. Growing up during the Depression, they continually evolved with the times (educated by their three daughters!). Their acceptance and kindness led to many deep connections that transcended generations; in many ways they were the heart of their community.

Proud to be their progeny and extended family are daughters Donna Fitch, of Calais, Vt., Diane Fitch, of Calais and Yellow Springs, and Judith Fitch Robert, also of Calais, and their partners, John McCullough, Carol Simmons and Bernard Robert. They were engaged and supportive grandparents to Mattie Fitch (Jordan Stiver), of Yellow Springs; Robin Fitch-McCullough, of Burlington, Vt., Porter Fitch (Joely), of Cincinnati; Hollister Fitch (Ian Sherman), of Burlington; Luca Montore, of Boston; Liam Robert, of Burlington; and Renee Robert, of Calais; and great-grandchildren Julien Stiver and Pippin Fitch-Stiver, of Yellow Springs. Cousins, nieces and nephews also held a special place in their hearts.

A memorial celebration is being planned for Sunday, Sept. 25, in Vermont, with details to be announced.