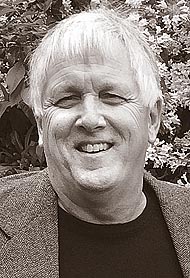 It is with great sadness that we share the news that Ronald Michael Hampton, 71, of Yellow Springs, passed away unexpectedly Thursday, Sept. 22, 2022, at Soin Medical Center. He was born Nov. 22, 1950, in Springfield, Ohio, the son of Roy and Edith (Gierus) Hampton.

Ronnie’s career included being an electrician at Antioch College. After retiring from the college in 2012, Ronnie had his own electrical and general handyman company servicing many in the Yellow Springs area. Ronnie loved life and was known by everyone, didn’t know a stranger, and was always quick to respond when needed. Known for his generosity, sense of humor and his laugh, Ronnie was much loved and will be missed by his family and everyone who knew him. He was a thoughtful and considerate individual with a giving heart, which he also extended to his furry cat children.

He is survived by his beloved wife of 40 years, Suzette Castonguay, and the children they shared, Laurette Nichols, Kenny Oemisch (Delilah), Paul Oemisch (Jessica); and grandchildren Quinten, Garrett, Alyss, Corbin and Zoe. He is also survived by sisters Beverly Hampton (Howard McClelland), Barb Slone and Sherry (Dennis) Chesser; a sister-in-law, Debbie Hampton; many nieces and nephews; and many close and dear friends. He was preceded in death by his parents; a sister, Lynne Marie Hampton; and a brother, Roy Matthew “Matt” Hampton Jr.

A Visitation Memorial will be held from 4–8 p.m. Friday, Sept. 30, at Neeld Funeral Home, 1276 N. Detroit St., Xenia. A Mass will be held at a later date at the convenience of the family at St. Paul Catholic Church. In lieu of flowers, contributions may be made to the Dayton Foodbank, 56 Armor Place, Dayton, OH, 45417; or to St. Jude Children’s Research Hospital, 501 St. Jude Place, Memphis, TN, 38105-9959, in his memory. Condolences may be made to the family at http://www.NeeldFuneralHome.com.

One Response to “Ronald Michael Hampton”