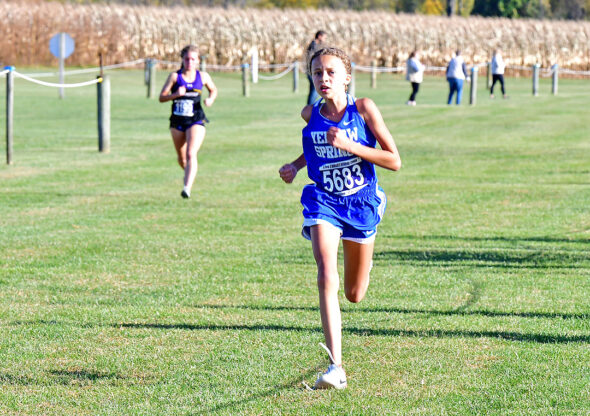 The McKinney Middle School girls team won the Metro Buckeye Conference cross country meet for the second year in a row Friday, Oct. 14, during the championships held at Cedarville University. The team of Abebu Barnett, Elise Bongorno, Violet Matteson, Sierra Sundell-Turner and Bella Thomas hoisted the championship trophy at the conclusion of the meet. Earning all-league honors were Violet Matteson and Sierra Sundell-Turner.

The YSHS girls team ran to a third place finish and were led by the third place effort of senior Cheyan Sundell-Turner. The duo of ninth grader Sasi Drees-Johnson (9th) and senior Josie DeWine (13th) added to the top three finish. Rebecca DeWine, Hannah Finney and Lauren Finney were valuable contributors to the Bulldogs’ final score. Sundell-Turner earned all-league honors for the fourth year in a row while Drees-Johnson was a first time all-league recipient.

Senior Josie DeWine was the recipient of the MBC Conference Coaches Award.

With no seniors on the squad, the YSHS boys team came in fifth place. Junior Jack Horvath (23rd) and ninth-grader Kyle Johnston (25th) ran nearly identical times of 20:00 while sophomore Isaac Lewis (27th) was close behind in 20:23. A pack of Bulldogs added to the team score with the majority of the runners earning season best times: Kyle Raymer, Kael Cooney, Collin Calfee, Evan Galarza, Arthur Devore, Zach Butler and Charles Whitlock were all within 15 spots of one another in showing tremendous depth and teamwork.

Coach Isabelle Dierauer was very pleased with these season ending performances during the most important cross country meet of the year. The Bulldog squad of 34 runners was the largest team in recent memory and performed admirably throughout the season.

The McKinney season ended Tuesday Oct. 18, at the Young’s Invitational while the high school teams are competing at the District meet on Saturday, Oct. 22, at Cedarville University.
—John Gudgel, coach

The Bulldogs pulled off another win for the season against Cincinnati Country Day on Tuesday, Oct. 11, prevailing 4–1. The team’s next two undertakings were ties, with a scoreless match against Wayne on Thursday, Oct. 13, and a one-to-one match against Hamilton Badin on Saturday, Oct. 15.

The team trounced Middletown Christian 13–0 in a postseason match on Monday, Oct. 17.
The team’s season record stands at 15–1–2, with a conference record of 3–1–0. The Bulldogs will face off against Tri-County North at sectional championships on Thursday, Oct. 20, beginning at 7 p.m.

The team’s current season record is 15–7, with a conference record of 7–1. At press time, the team had yet to face Covington on Tuesday, Oct. 18, at sectional championships.