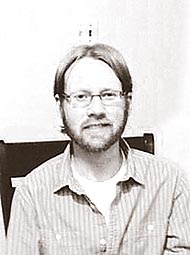 John moved with his family to Yellow Springs when he was 3 years old. He attended Yellow Springs public schools from kindergarten through graduation from high school in 2002, developing a life-long love of learning there. His favorite subjects were history and political science. A favorite activity for John was being on the “Quick Recall” team and winning several local events. As a child, John participated in local youth sports and Boy Scouts.

He was a voracious reader from a young age. One summer, John read all the juvenile science fiction books at the local library and insisted that his parents take him to other branches to find more books. As an adult, he favored fiction and nonfiction related to the Cold War era.

John attended American University, in Washington D.C., on an academic scholarship, and graduated in 2008 with a BA in political science. He was a member of Sigma Alpha Mu fraternity, where he developed life-long friendships. He loved his country and was proud of his work as a congressional aide to a U.S. congresswoman.

After graduation, John worked primarily in sales and service. He aspired to be an attorney and political strategist. He loved to have political discussions and debates with anyone who was willing to listen and lose the argument. He could clearly and factually explain complex political theories and situations.

John was loyal and supportive of his family and friends. He loved large family gatherings and baked pies for Thanksgiving dinners. He celebrated others’ accomplishments and rarely spoke poorly of anyone.

He learned to repair his own cars and had a knack for finding older vehicles in good condition at bargain prices. He was a sports fan and active fantasy football player.

John was preceded in death by his grandparents, Patty and Joe Wehner and Ann and Jack Carroll, and aunts Ann Wehner and Louise Walther Carroll. He is survived by his parents, Pete and Margie Wehner, of Yellow Springs; sister, Caitlin “Lana” Wehner, her husband, Greg Fister, and their children, of Hutto, Texas; as well as aunts and uncles Julie Wehner, Paul and Paula Wehner, John and Gail Carroll, Maureen Brustkern, Clair Brustkern, Rose Ann Carroll (Kevin Moran) and Tom and Sue Carroll; and numerous cousins and friends.

Visitation will be held from 4–6 p.m. Friday, Oct. 21, at Newcomer Funeral Home, 3380 Dayton-Xenia Road, Beavercreek, where a celebration of John’s life will begin at 6 p.m.

In lieu of flowers, the family suggests a donation to the Yellow Springs Schools’ “Quick Recall” program in John’s name or a charity of your choice.