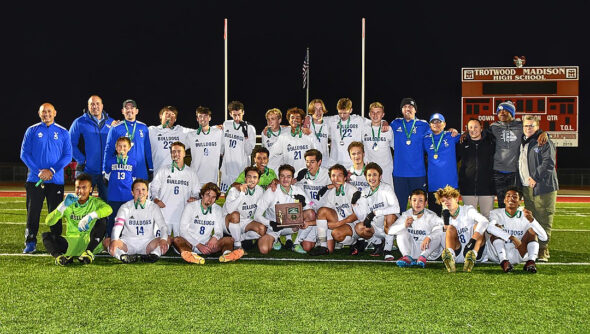 Senior Eli Eyrich — currently ranked number one in the state for points scored and number two for goals netted this season, according to MaxPreps — brought in three goals, with Senior Henry Smith-Heston bringing in one. Senior goalkeeper Krishan Miller blocked four goal attempts from the opposing team, aiding the Bulldogs in racking up yet another win against a scoreless opponent.

After the win, the team returned to Yellow Springs to a waiting escort of YS Police Department and Miami Township Fire-Rescue vehicles, which led the team’s bus from Antioch Midwest to YS High School, where community members cheered them on. 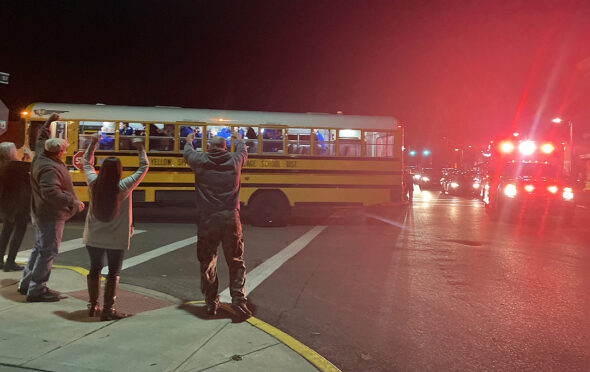 On Thursday, Oct. 27, a number of villagers greeted the returning Yellow Springs High School varsity boys soccer team following a win against Botkins to claim the Division III district title and move on to the regional semifinals. The Bulldogs were escorted by members of Miami Township Fire-Rescue and the Yellow Springs Police Department. (Photo by Jessica Thomas)

Competing for the fourth year in a row at the regionals, Cheyan Sundell-Tuner finished in 21st place at the Troy Regionals. Cheyan capped off a fine four-year career as she became the first YSHS female cross-country runner in recent memory to qualify for the regionals for four consecutive years.