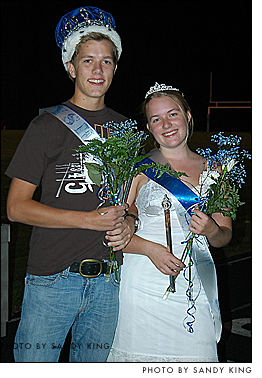 YSHS exchange student Anders Ingebrigtsen and senior Amelia Tarpey were named the 2008 Homecoming king and queen last Friday night., Sept. 19, at halftime ceremonies. The Bulldogs beat the Ridgemont Gophers 23–22 in an exciting Homecoming game in which the Bulldogs pulled out a last-minute win with a field goal by Joe Fugate.

The Bulldog football team lost 33–20 to the Marion Catholic Irish on Sept. 12, but came away from the game on Friday, Sept. 19, with an exciting 23–22 Homecoming victory against the Ridgemont Gophers.

Against Ridgemont, the Gophers made the first touchdown in the first quarter on a 28-yard pass to the end zone. The extra point was successful. But the Bulldogs rallied late in the quarter as quarterback Ryan Newsome handed the ball to Raphael Allen for a 22-yard touchdown with no extra point.

Building on their momentum, the Bulldogs scored again in the second quarter when Newsome handed off to Allen, who broke through the Gophers defensive linemen for a 50-yard touchdown. The extra point by Joe Fugate was good.

The Gophers soon scored a second touchdown and extra point to take a slight lead. But Newsome came back with a 35-yard touchdown pass to Ian Wimberly and a successful extra point.

With the Bulldogs trailing the Gophers 22–20 and two minutes and 17 seconds left in the game, Newsome completed a 48-yard pass to Allen for a first down. On the fourth down, Bulldog coaches called for a field goal. The crowd went crazy with excitement, and Assistant Coach Craig McCann made a small gesture asking the Bulldog fans for silence for a field goal that could make or break the game. Snapping for the Bulldogs was Raphael Allen, holding was Allen Cox. Fugate kicked and scored for a one-point lead and the crowd’s ballistic cheers.

With 19 seconds still on the clock, the Bulldogs kicked off to the Gophers once more and Allen intercepted a pass to shut down Ridgemont’s last attempt to come back.

Volleyball wins one, loses one

The YSHS volleyball team beat Dayton Christian in straight sets on Thursday, Sept. 18, and put up a good fight but finally succumbed 3–2 to Xenia Nazarene on Saturday, Sept. 20.

The Yellow Springs girls soccer team trampled Middletown Christian 4–2 on Saturday, Sept. 20, but were defeated equally soundly by a seasoned Fairborn team on Monday, Sept. 22. The Lady Bulldogs’ record is 6–5 in the season.

Against Middletown, Ryder Comstock may have gotten the first goal on an assist from Katie Nickels, but after that it was all Nickels all the time. Middletown came back in the last moments with two goals but could not save themselves from defeat.

Individually, Jake GunderKline led the Bulldogs with his second place finish. He and Jacob Kasperski, from Germantown’s Valley View, had a classic duel, battling each other down the hills and through the final three creek jumps. Then Kasperski, with a best of 16:45 for 5k this year, broke loose for the 17:03 win. GunderKline finished in 17:12, 61 seconds faster than last year’s fourth place finish.

A wrong turn with one kilometer to go made for a challenging race for Alexis Onfroy and Brock GunderKline, who fell back from 5th and 6th place to finish 9th and 10th after rectifying their error and making up a lot of ground with high energy sprints to the finish line.

Wrong turn aside, Onfroy and Brock GunderKline paced the main Bulldog pack to get Anthony Pettiford to a season-best finish and Nerak Patterson next in line for 16th place. Nathan Auten, Gabe Amrhein, Adam Zaremsky and Nick Whalen all achieved lifetime bests in their follow to the finish.

For the girls team, Hannah Kumbusky achieved the 22:37 5k she had headed for all season for an eighth-place finish out of 45 runners and a lifetime best by 11 seconds. Her lead brought the girl’s team to a second place finish with 55 points, behind Bellbrook with 20. Valley View was third with 61.

Mid-field support was provided by Allie Berry, Reini Brickson, and Liz Gonder. Completing the team’s scoring was Kelly Miller, and Mary Triplett book-ended Kumbusky’s achievement with her own lifetime best.

For the McKinney girls team, Paloma Wiggins and Lois Miller placed second and third overall in 12:57 and 13:15, leading the Lady Bullpups to a third-place finish behind Bellbrook and Beavercreek.

The YSHS boys soccer team beat Middletown Christian 1–0 on a goal by Ramon Bieri, assisted by Kevin Sikes-Gilbert on Saturday, Sept. 20. The team is now 6–3–3 in the season.