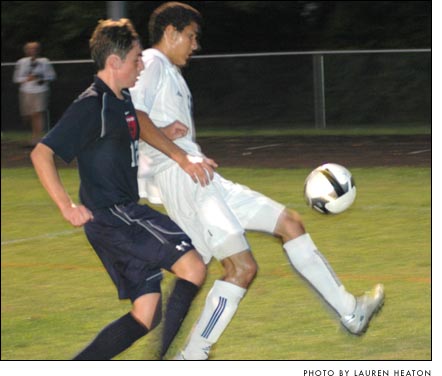 The Yellow Springs boys soccer team won 3–0 over Miami Valley School last Saturday during a home game at the high school field. Shown above is Alexis Onfrey, at right, who scored two goals. Chris Johnson added a third point to the score.

Alexis Onfroy opened his junior season in cross country by leading the Bulldogs to victory at the 9th annual Ambassador Classic in Xenia on Saturday, Sept. 6. Onfroy covered the hilly 3.1 mile course in 17:31, good for second place overall out of the 137 runners in the race. Yellow Springs won the 13-school competition with 58 points. Kenton Ridge, ranked fourth in last week’s Dayton Daily News Division II poll, was second with 65. League rival and the meet’s host, Xenia Christian, was sixth with 148 points.

Jake Gunderkline improved on his previous best time of 18:09 on the Xenia course to place fourth in 17:43. Brock Gunderkline took fifth place in 18:11.

The next week, the boys finished third in the Graham Invitational, a meet that included some of the state’s top teams. Leading the way for the Bulldogs was Alexis Onfroy, who finished third overall. Jake Gunderkline was sixth in 17:39, brother Brock was 12th in 17:59, and Anthony Pettiford was 33rd in 19:11. Completing the scoring for the Bulldogs was freshman Zach McHugh, 37th in 19:18. Nerak Patterson 54th, and Nate Reed, 59th rounded out the varsity team’s placings.

Just 2 points separated the Bulldogs from second place which was taken by Sidney Lehman, the #11 ranked Division III team in the state. Springfield Northeastern, which, according to coach Vince Peters, is one of the top Division II programs in southern Ohio took first place. Local rivals Cedarville and Xenia HS were 15th and 16th, respectively.

“The team is starting to come together as a unit,” Peters noted. “They raised their overall win-loss record to a respectable 41 and 16 after starting out 16 and 12 back in August.”

On the distaff side, sophomore Hannah Kumbusky led the lady Bulldogs in Saturday’s race. Kumbusky, who placed 52nd overall out of the 147 women finishing the race, recorded a season best performance of 23:58 for the challenging 3.1 mile course.

Reini Brickson, Elizabeth Gonder, and Allie Berry kept it close as they finished in 62nd, 66th, and 67th. Mary Triplett recorded a personal best of 29:36 in finishing 129th to complete the scoring.

The competition featured Versailles High School, which, according to Peters, was the number one ranked team in the state until it was beaten by Minster at the Tiffin Invitational a week earlier. The girls put out their best group effort of the season in finishing 11th. Versailles took the crown with local powers Xenia and Cedarville finishing ninth and 10th respectively.

Max Fleishman was low scorer for the Bulldogs with a 48 over nine holes at the National Golf Links in Springfield as the golf team took on Southeastern and Northeastern on Tuesday, Sept. 9. Unfortunately, it was not enough to save the Bulldogs from a third place finish. Lucas Donnell, 49; Zane Reichert, 59, and Kevin Mayer, 63, rounded out the scoring for the team.

The next day at Sebastion Hills Golf Course, the team lost to Greeneview. Leading scorer for the Bulldogs this time was Lucas Donnell who shot a 46. Max Fleishman, 49, Kevin Mayer, 54, and Eric Rudolf, 58 rounded out the scoring. On the season Yellow Springs High School is 5 and 15.