It’s been more than 10 years since a YSHS football team has scored 47 points in a football game, let alone in the same game that their opponents scored just 40. But that was the story of the come-from-behind, late-season victory that the Bulldogs tasted on Friday, Oct. 10, against Perry.

Perry scored twice in the first quarter, before Yellow Springs had a chance to get on the board. Both extra-point conversions were stopped by Joey Bailey and Raphael Allen. But the Bulldogs rallied back, strattling the first and second quarters to complete the plays to win their first touchdown. Allen carried the ball 23 yards, Bailey carried for 28 yards, and Allen made a small gain for the 4th down and 4, when Ryan Newsome took the snap, dropped back and threw a 20-yard pass to Joe Fugate for a Bulldog touch down. Fugate also scored the extra point.

Perry lengthened its lead to 20–7 with a third touchdown in the second quarter, but the Bulldogs answered with a handoff from Newsome to Bailey, who found every hole the Bulldog line made for him for a 55-yard touch down. Fugate kicked again for the extra point.

The ball was quickly back in Bulldog hands after a Perry fumble, and Newsome wasted no time in handing off to Bailey, who ran it for another 43-yard touch down. The score turned out to be the front end of back-to-back touchdowns after the Yellow Springs kick was recovered by Bulldog Sam Morrison, who got the ball to Newsome for another touchdown and a 27–20 halftime lead over Perry.

The third quarter began like the first, with two touchdowns for Perry, and it took Yellow Springs until 11 minutes left in the game to even the score at 34–34. Perry soon scored again, with no extra point, and the Bulldogs answered with a 45-yard pass from Newsome to Allen for a touch down. With 27 seconds left on the clock, Fugate converted for the lead, and before they left the field, Allen intercepted a Perry pass and ran the ball for a final Bulldog touch down for good measure. 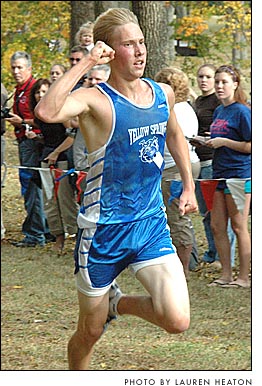 Racing against 230 runners on Tuesday, Oct. 14, Jacob GunderKline grabbed a 25-second personal record along with the win at the 23rd annual John Bryan Invitational cross country meet, the largest to date. He led the Bulldogs to their third straight JBI title. (More on this race will appear in next week’s News.)

Scoring just 20 points in a sport where a perfect outing is 15, the Bulldogs were led by Jacob GunderKline. The National Junior Olympic Champion in the race walk used his strength developed in pedestrianism to take the individual title in 17:23.8. Finishing second and third on the challenging course were Brock GunderKline and Alexis Onfroy. Completing the scoring for the Bulldogs were team captain Anthony Pettiford in sixth and Nerak Patterson in ninth.

Troy Christian came in second with 45 points, ahead of Xenia Christian in third with 75.

The YSHS boys soccer team closed out its regular season with two big wins this past week, shooting down the Franklin Monroe Jets 5–2 on Tuesday, Oct. 7, and clipping the wings of the Troy Christian Eagles 10–0 on Saturday, Oct. 11, to win sole possession of the MBC title.

Franklin Monroe came to town ranked seventh in the latest Division III Miami Valley soccer coaches’ poll. After 10 minutes of scoreless action, Kevin Sikes-Gilbert drew first blood for the Bulldogs, driving in a low, hard shot from 12 yards out. Chris Johnson picked up the assist. Poor defensive marking led to a 2–1 Jets lead, until Sikes-Gilbert decided to step in and take charge of the game.

He scored the equalizer from the right baseline, with a zero-angle, near-post shot that beat the Jets’ keeper. Zeke Hardman gathered the assist. Sikes-Gilbert scored again when Jake GunderKline’s through-pass sent him for a one-on-one with the goalie, a move the pair would repeat for a 4–2 lead before the halftime.

Catching the Jets loafing in front of their goal in the second half, Asa Casenhiser sprinted through the midfield into the Jets’ penalty box with Alexis Onfroy streaking to the far post, and delivered the perfect cross, which Onfroy headed in for the final score.

Against Troy Christian, Yellow Springs entered the contest a heavy favorite as the two-time defending MBC champ, with a perfect 4–0–0 MBC record, and having only allowed one goal in conference play this season. Jake Trumbull’s goal, assisted by Giuliano Irace, at the 15-minute mark was all Yellow Springs would need on its way to a third straight MBC title. But Trumbull netted a second goal, followed by Sikes-Gilbert and later Jake GunderKline, Onfroy and Hardman, who nodded one in from six yards out to close out the first half scoring 6–0. In the second half, Johnson and Casenhiser each assisted Sikes-Gilbert for two more goals, before both GunderKlines scored the last two points of the night.

The Lady Bulldogs were relentless in their 7–0 slaughter of Twin Valley South in the first round of the Division III sectional tournament held on the home field on Monday, Oct. 13. Yellow Springs finished its regular season 8–8.

Katie Nickels scored first for Yellow Springs on an assist by Ashanta Robinson. Ryder Comstock and Nickels each scored three more goals before Rachel Trumbull sent Nickels to goal for the last score of the evening.

Lady Bulldog keeper Katie Triplett had seven saves, with one goal line save by Trumbull.