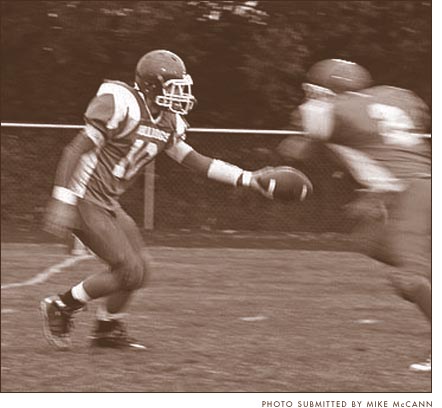 Against Xenia Christian, Yellow Springs senior striker Zeke Hardman took a pass from Chris Johnson, dribbled past several of the Ambassadors’ defenders and netted what would turn out to be the game-winning goal. Two minutes later Jake GunderKline passed to Alexis Onfroy, who served the nutmeg through the legs of Xenia Christian’s onrushing net-minder. Next, Johnson converted Onfroy’s corner kick to a goal. In a rare appearance up front attacking the goal, Brock Gunder-Kline scored the final goal in the second half with a fine shot from 12 yards out. Onfroy collected the assist.

Yellow Springs goalie Ryan Phillips, aided by defenders Kevin Sikes-Gilbert, Asa Casenhiser, Brock and Jake GunderKline, recorded the team’s fourth straight shutout, and seventh in the season, with a smothering display of defense that allowed no shots on the Bulldog goal for the entire game.

Yellow Springs earned the third seed in the end-of-the-season tournament and will host Southeastern at 7 p.m. on Tuesday, Oct. 14. If they win, the Bulldogs play fifth seed Miami Valley on Saturday, Oct. 18.

Against Xenia, Ashanta Robinson made the first goals for the Lady Bulldogs, followed by a score for Ryder Comstock and then Katie Nickels. The Ambassadors got one goal in before Comstock scored again on an assist by Nickels.

The Bulldog football team lost 28–8 to the Fairbanks Panthers on Friday,Oct. 3.

The Panthers scored early in the first quarter, then three more times in the second to put them up 28–0 at the halftime. Early in the fourth quarter, Bulldog Ryan Newsome threw a 38-yard pass to Raphael Allen that brought Yellow Springs within reach of a touchdown. Joey Bailey took the next handoff and completed a 34-yard pass to Allen, which was called back for a penalty on the Bulldogs who brought the ball back for a punt, which Fairbanks took for a 95-yard run back and touch down.

But the Bulldogs were in the groove. On their possession, they worked their way down field, and Joey Bailey made the touchdown. The Bulldogs took the extra point conversion pass from Newsome to Joe Fugate for two points.

Allen had nine tackles, while Bailey and Devon Freeman had seven each, Jeremy Paul had five and Allen Cox had three. Newsome had three tackles and one quarterback sack.

The YSHS boys cross country team overwhelmed Xenia Christian and Greeneview on Thursday, Oct. 2. Jake and Brock GunderKline finished one and two in 10:31 and 10:40, respectively, and five other Bulldogs finished in the top 10 to dominate the meet. Anthony Pettiford came in fourth in 11:29, followed by Gabe Amrhein, Zach McHugh, Nathan Auten and Birch Robinson-Hubbuch.

The YSHS girls did not finish a team, but Reini Brickson finished fourth overall for the Lady Bulldogs.

At the middle school level the McKinney girls won by 10 points over Xenia Christian, with Greeneview not finishing. Paloma Wiggins won the title in 12:32, followed close behind by Lois Miller in third and Michaela Roe in fourth place, which propelled the Lady Bullpups to victory.

Marlee Layh jumped for the spike at the Monday, Oct. 6, volleyball game against Xenia Christian. The match was closer than the score, 16–25, 16–25, 21–25, would indicate, as Xenia pulled away with the win.

Against Troy, Jenna Boettcher had four aces, Crystal Reedy and Boettcher each had six blocks, Thornton took 19 digs, Reedy had 11 kills, and Beer had 22 assists.

Against Middletown, Beer had 24 assists, Scott had three kills and eight blocks, Thornton had 14 digs. And against Xenia, Thornton had five blocks, Scott and Reedy each had 17 kills.