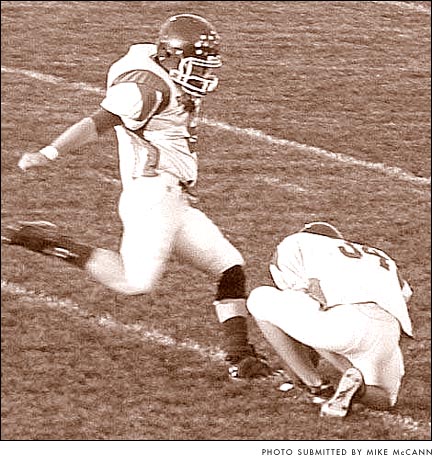 Joe Fugate kicked the extra point for the Bulldogs with Allen Cox holding on Friday, Sept. 26, as Yellow Springs struggled and lost 55–23 against the Waynesfield Goshen Tigers.

Last Saturday, Sept. 27, the YSHS boys soccer team extended its unbeaten streak to seven games with a 7–0 victory over the Newton Indians. The Bulldogs are now 5–0–2 in their last seven games, 7–3–3 overall. The team still leads the Metro Buckeye Conference with an unblemished 3–0–0.

Chris Johnson got the only goal Yellow Springs would need on Saturday just 10 minutes into the match. Kevin Sikes-Gilbert threaded a pass through the Indians’ defense to a wide-open Johnson, who trapped, paused and placed his shot just inside the near post to put the Bulldogs in front for good.

After a few halftime adjustments the floodgates opened for the ‘Dogs. Zeke Hardman hit a powerful shot out of the left corner which was deflected and then tapped in by Jake GunderKline. Three minutes later Hardman again shot a missile to the goal, which was blocked down before Alexis Onfroy streaked in from out of nowhere to tally another for Yellow Springs. The golden boot of Sikes-Gilbert sent Onfroy to goal again for a 4–0 Bulldog lead, followed by a corner kick from Jake GunderKline that freshman sensation AJ Wagner headed past a diving goalkeeper.

With 20 minutes left in the game, Sikes-Gilbert showed that he knows a few things about finishing too, burying an assist from Jake GunderKline in the back of the nets. Then the duo who started it all ended it all, when Johnson sent a free-kick to Sikes-Gilbert, who one-touched his shot into the right upper-90, to post the final winning margin for the team.

Freshman goalie and wunderkind Jake Trumbull, with the help of senior defenders Asa Casenhiser, Brock GunderKline, Sikes-Gilbert and Jake GunderKline, pitched their fourth shutout in the last seven games, which brings their goals-against-average per game down to 0.43 over that span. On the other end of the pitch, the Yellow Springs offense has netted 19 goals for an average of 2.71 goals-form per game over the last seven played.

Ryder Comstock got the first goal for the Yellow Springs team, which was then aided by its very opponents when Newton scored on itself to put the ‘Dogs up 2–0. Katie Nickels got the last word to seal the win for Yellow Springs.

The YSHS football team lost 55–23 to the Waynesfield Goshen Tigers on Friday, Sept. 26.

The Tigers started the first play with an 80-yard touch down run in the first 40 seconds of the game. But the Bulldogs came back with an unlikely gain off a penalty that backed the team up to the Tigers 25-yard line, where Ryan Newsome handed the ball off to Raphael Allen in two plays for a touchdown and extra point by Joe Fugate.

Bulldog defensive stops by Allen, S.J. Scott, Allen Cox, Joey Bailey and Newsome held the Tigers to two more touchdowns in the first quarter. After takedown tackles by Will Riddley, Fugate, and Sam Morrison, Waynesfield scored, but Allen intercepted the extra point conversion on the team’s third touchdown. The play was directly followed by an 85-yard touchdown by Allen, with the extra point by Fugate to make the score 19–14.

The Tigers scored three more times in the second quarter, and Fugate kicked a 25-yard field goal before the halftime for a score of 41–17. A pass from Newsome to Wimberly boosted the Bulldogs’ trailing score.

For the offense, Allen had 209 return kick-off yards, and Wimberly had a game and career high in receptions with seven for 123 yards. Newsome had 15 completed passes in 32 attempts for 232 yards and two interceptions.

Sophomore Nerak Patterson led the Bulldog cross country team to a third place finish among the 22 schools at Saturday’s Buck Creek Invitational on Sept. 27. The lanky distance ace legged out an impressive season best of 18:00 to place 18th overall out of the 177 runners.

These five, along with Nathan Auten, Birch Robinson-Hubbuch, and Mitchell Brickson, all ran in a fairly organized pack, which helped them all to achieve higher goals, according to Peters.

The Lady Bulldogs placed 11th at Saturday’s cross country meet at Buck Creek. Hannah Kumbusky enjoyed near perfect conditions to lower her previous best to 22:09 for a 10th-place finish out of 135 runners. Team captain Reini Brickson followed in 46th place in 22:28. Allison Berry finished with a season best time for 51st, followed by Elizabeth Gonder and Mary Triplett, who both had lifetime bests.

At the same tournament, the McKinney girls won fourth. Among the runners from some 20 different middle schools on Saturday, eighth grader Paloma Wiggins distinguished herself by nabbing second place in 13:00, just ahead of Lois Miller in fifth place in 13:23. The Bullpups placed fourth out of 10 teams.