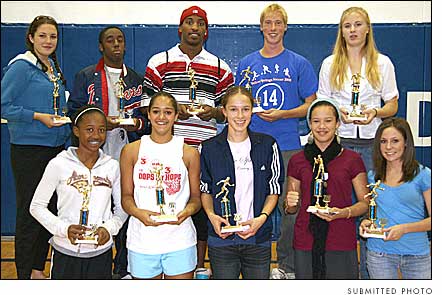 Yellow Springs High School and McKinney School athletes were recognized by the school on Wednesday, Nov. 5, for their participation and performance in the fall sports program. The awards ceremony honored members of the football team, the boys and girls soccer teams, the volleyball team and the boys and girls cross country teams.

Members of the YSHS football team were recognized by the Northwest Central Conference (NWCC). Elected to the league’s first team was Raphael Allen as defensive back. On the league’s second team were Joe Fugate as kicker and tight end, and Allen as running back. Quarterback Ryan Newsome, offensive linesman Stephen Scott and defensive back Devon Freeman all received honorable mention by the league.

Within the team, Allen won this year’s Bulldog award.

The YSHS boys soccer team received a glut of awards from within as well as outside the school, as many of its members were recognized throughout the region and the state. Kevin Sikes-Gilbert raked in top honors as his team’s most valuable all-around player, the Metro Buckeye Conference (MBC) 2008 player of the year, Dayton division III Miami Valley player of the year, the Miami Valley Scholastic Soccer Coaches’ Association’s (MVSSCA) player of the year (for Dayton’s east sectional), the Springfield News-Sun’s all-area player of the year, and a pick for the All-Ohio All-Stars’ first team.

The rest of the Bulldogs pulled in an impressive amount of hardware, too. At home, most valuable offensive players were Alexis Onfroy and Zeke Hardman, while for defense it was Brock GunderKline. The team’s impact award went to Jake Trumbull, and the Bulldog award to Asa Casenhiser.

Receiving special recognition by the MVSSCA were both Sikes-Gilbert and Onfroy, elected to the section’s first team. On the section’s second team were Brock GunderKline and Zeke Hardman, and on the third team was Asa Casenhiser.

Wagner again received the Kettering Medical Center’s sportsmanship award, while Jim Hardman was also elected as the section’s coach of the year.

Also winning recognition from outside of Yellow Springs were several members of the YSHS girls soccer team. Amelia Shaw received the MBC’s sportsmanship award, while Ryder Comstock was nominated as the league’s athlete of the year, as well as her YSHS team’s most valuable player.

Comstock and Brenda Jones made the league’s first team, while Katie Nickels, Ashanta Robinson and Rachel Trumbull were elected to the league’s second team. Coach MacKenzie Reynolds also won the league’s coach of the year award.

For the volleyball team, Yellow Springs athlete Taylor Ennis won the MBC’s sportsmanship award. Player Crystal Reedy was selected as the team’s most valuable player and was the winner of the Bulldog award.

For the boys harriers, Jake GunderKline was recognized by his team as the most valuable runner, by the MBC as runner of the year and as a member of the league’s first team, along with Brock GunderKline, Alexis Onfroy and Anthony Pettiford. Nerak Patterson, Gabe Amrhein and Zach McHugh were nominated to the league’s second team, while Coach Vince Peters won the league’s coach of the year award.