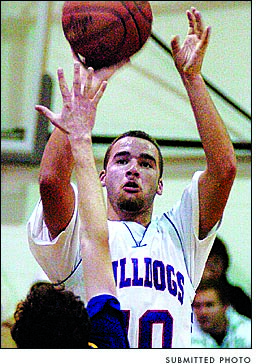 Ryan Newsome had a career high 29 points, including seven three-pointers, in the Bulldogs’ close loss on the road against Jefferson 62–58 on Friday, Dec. 12.

The Yellow Springs High School boys basketball team lost a nail-biting game at Jefferson 62–58 on Friday, Dec. 12. The Broncos are second in the Dayton Daily News rankings so far in the season. The Yellow Springs team had previously squelched a hopeful Xenia Christian team 62–39 on Tuesday, Dec. 9.

The Bulldogs jumped out to a 5–0 lead against Jefferson on Friday and held it at 15–14 at the end of the first period. Chris Johnson scored all 6 of his points in that quarter. The second quarter went Jefferson’s way, as they outscored the ’Dogs 19–16 to take a 34–30 half time lead. Ian Wimberly and Raphael Allen scored 10 of the ’Dogs 16 points in the quarter. Jefferson then began to pull away to 50–40, with Ryan Newsome working furiously to score all 10 of that quarter’s points.

The Bulldogs came roaring back behind great defense. Led by Raphael Allen, Chris Johnson and Ryan Phillips, the Yellow Springs team held Jefferson’s top player, Adrian Payne, to 12 points in the game. Despite some monster dunks from the Broncos’ 6’10” center, the Bulldogs spent the fourth quarter cutting away at the lead.

Newsome lit the scoreboard with 21 of his career-high 29 points coming in the second half, including seven three-pointers, none of which was more timely then the last one that cut the score to 58–60 with 37 seconds left. The Bulldogs played great defense and with 14 seconds left had an unrealized chance to retake the lead.

“I give credit to the kids effort,” Coach Brad Newsome said. “We got a chance to see what type of a team they can be. If they continue to get better every day in practice and each game, the sky is the limit for what they can do.”

The Lady Bulldog basketball team crushed Jefferson 60–22 on Thursday, Dec. 11. It was an ugly game for the Lady Bulldogs, who missed many easy buckets, but took the victory any way they could. The first quarter ended in a 4–4 tie before Yellow Springs went ahead 16–11 at the half time. The Lady Bulldogs gained control in the second half with a 24–2 third-quarter run with full court press and Ashanta Robinson’s 9 points. The team continued the pressure in the fourth quarter with a 20–9 run and 25 offensive and 13 defensive rebounds. Robinson led the team with a triple double (29 points, 11 rebounds and 11 steals).

The freshman boys basketball team defeated Jefferson 42–23 on Friday, Dec. 12, led by JT Trumbull with 11 points, Greg Felder with 9, and Ameer Wagner with 8. The boys beat Dayton Stivers 38–24 the following day, led by Trumbull with 10 and Jake Fugate and Wagner with 9 each.