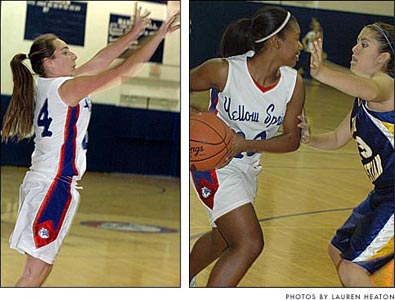 The YSHS girls basketball team showed up Xenia Christian 81–34 in a home game Monday, Dec. 8. Alex Beer, left, and Roniqua Cobb shot well from the outside to help their team to victory.

It was an understated first week of basketball for Yellow Springs High School, evidenced by the Bulldogs 60–53 loss to Emmanuel Christian in their first game of the regular season.

With lackluster rebounding and a poor free throw percentage (5 for 18), the Bulldogs ended the first quarter down 17–12 and stayed about 10 points behind until late in the game. Early in the fourth quarter, the ’Dogs came roaring back with a 12–3 run to tie game at 46. But 22 percent shooting from the free throw line came back to haunt the team, which ended up shooting 1 for 10 in the final quarter.

The YSHS girls basketball team fell 57–33 to the Dayton Christian Warriors on Monday, Dec. 1 and took a similar 51–33 loss against Miami Valley on Thursday, Dec. 4. But the girls were just as shadow of their future selves, the team that showed up on the home court Monday, Dec. 8, to throttle Xenia Christian 81–34.

Against Dayton’s full court trapping, the Lady Bulldogs fell behind by 15 points to finish the first half down 30–15. The third quarter was the back breaker, as the Warriors scored 23 points to the Bulldogs’ 8. The Bulldogs fell down in foul shooting with 7 out of 23, and the team was also missing senior Ashanta Robinson, who had to sit out the first contest due to a penalty that occurred during the soccer season. The bright spots for the Bulldogs was the play of senior post Melody Wright, who brought 8 points, 10 rebounds, and sophomore guard Stephanie Scott, who lead with 13 points for the team.

Against the Miami Valley Rams, Yellow Springs maintained its defensive intensity early on to end the first half down just a little at 25–18. But the girls fell apart again in the third quarter, scoring just four points. The Lady Bulldogs fell behind in overall shooting (11 for 38) and especially free throws (5 for 18), as well as giving up 19 turnovers. The team was led by Ashanta Robinson, with 14 points, and Stephanie Scott, with 11 points.

Yellow Springs was unstoppable against the Xenia Christian Lady Ambassadors. Their early lead just kept on growing, with three-point swish after swish by Ashanta Robinson, and mid-court buckets from Stephanie Scott.