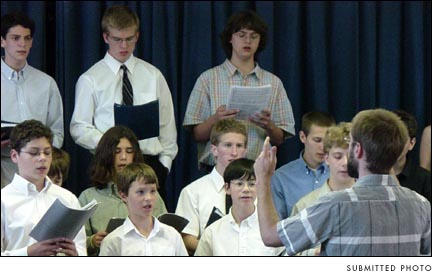 The Friends Music Camp chorus is shown here performing at a concert during the summer of 2007, led by choral director Brendan Cooney. Friends Music Camp staff will perform in concert Tuesday, Dec. 30, 7 p.m. at the Friends Care Extended Living Facility dining room in an event to raise funds for the camp’s scholarship fund.

The concert will feature performances by Friends Music Camp staff, campers, and friends, and a special performance by the Enderle String Trio of Zurich, Switzerland. Most of the performers are natives of Yellow Springs, and all have been campers themselves or members of the camp staff.

The program will include an original woodwind piece composed by Martha Hyde, a vocal composition for three women by Heidi Champney, a performance of J. S. Bach’s Brandenburg Concerto #3, selections from Mozart’s string music, and an original composition by pianist Brendan Cooney.

The Brandenburg Concerto will be performed by the Enderles, cellists Lisa Liske-Doorandish and her daughters, Miriam and Eleanor, and several former and current FMC staff members and former campers.

Martha Hyde, formerly of Yellow Springs and for many years a resident of Brooklyn, N.Y., is the daughter of Carl and Lorena Hyde. Heidi Champney and Wendy Champney, daughters of Peg and Ken Champney, both grew up in the village. Heidi now lives and performs in Vermont, while Wendy, a violist, and her husband, violinist Matthias Enderle, and their daughter, Chiara, a cellist, constitute the Enderle String Trio. Chiara, 16, made her U.S. professional debut early last month when she played second cello in a Schubert string quintet in a Chamber Music Yellow Springs concert.

Friends Music Camp is a coeducational summer camp for all youth aged 10 to 18, who would like to pursue musical excellence while participating in a caring community. It was organized in 1980 by Yellow Springs by resident Peg Champney and former resident Jean Putnam. Champney is still a co-director of the camp with Drea Gallaga and Nicholas Hutchinson.

The camp takes place every summer in July and early August at Olney Friends School, a Quaker boarding school located in Barnesville, Ohio, about 100 miles east of Columbus and about 30 miles west of Wheeling, WV. The 2009 camp will run from July 5 to Aug. 2 for four-week campers and from July 5 to July 19 for two-week campers.

“These programs and the Friends Music Camp have been the centerpiece of my life for 30 years,” said Peg Champney in a recent interview. “I love everything about the camp, but I particularly cherish the realization that so many original compositions are created in and for the camp. These compositions become a part of the camp experience and keep the staff coming back.”

Wendy Champney wasn’t a camper, although she has taught music at the camp for about 25 years.

“One of the most amazing and satisfying things about the camp for me is the deep communal attitude that pervades both staff and campers, probably the result of the combination of the Quaker culture and the great love of music there,” she said. “The competitive fever that characterizes life in the music profession is put aside, and the pure love of music is shared and enjoyed.”

Peg’s granddaughter, Chiara, who has been a camper most of her life, credits the FMC with much of her success as a musician.

“Everyone in the camp is accepted and loved no matter who he or she is and is appreciated for his or her own experience,” she said. “That gives the campers confidence they can use in the real world, not only in music but in other important aspects of life.”

Donations to the scholarship program are suggested at $10 for adults and $5 for children 12 and under. The camp provides scholarships to ensure that the Friends Music Camp experience is available to all young persons who would benefit from it.

* The writer is a free-lance contributor to the News.