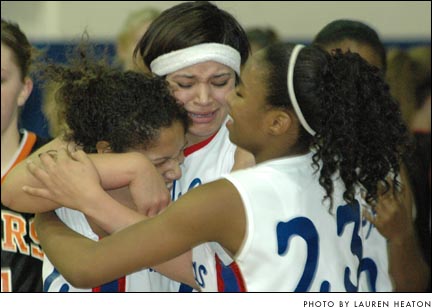 A Valentine’s Day Senior night produced the most exciting game of the season against Ansonia on Saturday. The girls came through under pressure in the final seconds to score the 65–63 win. Post-game emotions ran high for, left to right, Kristen Foster, Jessica Kellar and Natasha Perry.

When Erika Chick and Elizabeth Malone swim, they swim to win, and win big. The pair of YSHS freshmen set meet records in the 200 and 500 freestyle and 100 butterfly events at the sectional swim meet held at Trotwood Madison High School on Saturday, Feb. 14. They head into the Division II district meet this Saturday, Feb. 21, at Miami University in first and second place in their respective events. Girls events begin at 10 a.m.

Chick will be the top seed in her events at districts, and Malone is seeded first in the 100 fly and second in the 200 IM, next to Indian Hill freshman Elizabeth Heinbach, who finished just a fraction of a second faster than Malone at her sectional swim.

Valentine’s Day was the YSHS girls basketball senior night game of the season against Ansonia, which the Lady Bulldogs won 65–63 on two foul shots with two seconds left on the clock. Yellow Springs lost to Tri-County North 45–41 on Monday, Feb. 9.

The game against Ansonia was a senior night to remember. Yellow Springs started out strong in the first half leading 32–26, with senior and captain Ashanta Robinson scoring 13 points in the first half. With the Bulldogs ahead 39–35 deep in the third quarter, Robinson injured her ankle on a bad landing in the backcourt. Then with the two teams going toe to toe in the fourth, senior guard Melodie Wright was fouled out of the game.

But sophomore Stephanie Scott put the team on her back, and led the Bulldogs to victory. Scott took control of the game with slashing drives and clutch free throw shooting to score 15 points in the quarter. Tied at 61 with a minute left in the game, senior Jessica Kellar made a jump shot to put Yellow Springs up by two. Ansonia came back and tied the score. But Ansonia then fouled Scott, who sank both free throws for the win.

“I would like to thank the seniors for an outstanding season and wish them well in their future endeavors,” coach Duncan Thomas said.

Against Tri-County, Robinson and Scott led the first quarter charge with 11 points between them. But the second quater did not go well for the Bulldogs, who scored four points to Tri-County’s 17 to end the first half down 27–19. The Lady Bulldogs gained focus in the fourth period and got within two points (41–39) on Robinson’s three point shot from the corner. But Tri-County’s foul shooting sealed their victory. Scott led the Bulldogs with 17 points, followed by Robinson’s 16 points.

Dayton outscored Yellow Springs 17–9 in the first quarter. The Bulldogs came out for blood in the second, fighting back to tie the score at 28 at the half time. But things didn’t go their way in the second half. Kevin Sikes-Gilbert led the team with 10 points, followed by Devone Freeman with 11 (including three three-pointers) and Joe Fugate with nine.