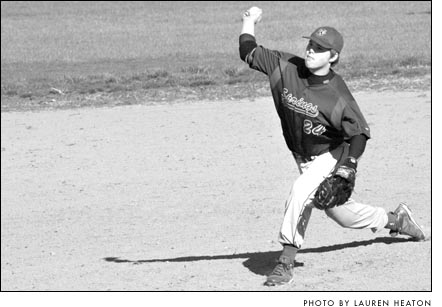 Joe Fugate pitched a blow-out winner against Xenia Christian on Friday, April 17, when the Bulldogs came out on top 29–11.

Competing in blustery, rain-swept conditions, the Bulldogs boys track team put forth a solid effort at the London tri-meet on Tuesday, April 21, to come in second with 59 points. London won the meet with 93 points, and Fairbanks took third with 15.5.

The 400-sprint relay team of Logan Norris-Sayres, Raphael Allen, Sam Morrison and Mario Cosey won its event in 47.8, while the 3200 relay team of Birch Robinson-Hubbuch, Josh Meadows, Mitchell Brickson and Anthony Pettiford took its event in 9:08.1. Chris Johnson took the long jump in 19’1.

A slew of second-place finishes also won the Bulldogs points. Cosey and Tony Parker tied in the 100 meters in 11.8, while Johnson finished the 200 in 25.2. Pettiford did his part in the 400, Robinson-Hubbuch in the 800, Gabe Amrhein in the mile and Brickson in the two mile. The discus event was covered by Ernest Johnson with a toss of 118’10, while Antone Truss took the high jump with 5’4. Allen finished the long jump in 18’.

The boys finished fourth out of 10 schools with 57 team points at Saturday’s Southeastern Invitational. Springfield Northeastern notched the victory.

Even though the Bulldogs didn’t win a single event, they had broad success, with senior Raphael Allen pulling most of the weight in the discus event, the long jump and two sprint relays with Mario Cosey, Tony Parker and Sam Morrison.

Sophomore Elizabeth Gonder led the women’s track team at Saturday’s Southeastern Invite by breaking the meet record in the 400-meter dash in 63.06 seconds and combining with teammates Brenda Jones, Ryder Comstock and Melodie Wright to smash the 400 relay vinyl in 54.46 seconds. Out of 10 schools, Kenton Ridge won the meet with 110 points, over the Lady Bulldogs’ 55 points.

Against Dayton, Addison Pettiford lost on the first court 1–6, 6–7 (8–6), as did Carl Weiner, who retired at 6–4, 5–7, 1–2 on the second singles court. At third singles, Will Turner defeated Anna Caldwell in a shut out match, but could not be saved by doubles teams Isaac Haller and Nick Sontag or Savita Vathija and Philip Murray, who both lost in straight sets.

Against Southeastern, Pettiford won the first set before falling 6–2, 4–6, 2–6. Turner defeated his opponent handily, as did Haller and Sontag at first doubles. Vathija and Murray lost 2–6, 4–6 on the second doubles court.

The Bulldogs lost every court to Xenia, including Pettiford at first singles, Carl Weiner at second, and a close third singles match that Turner lost to Andrew McNeely 5–7, 6–7 (7–1). The first doubles court was trounced, but second doubles players Vathija and Murray took their game to three sets before raising the white flag.

The YSHS baseball team played three games in a row last week on Thursday, Friday and Saturday, April 23–25, losing to Troy Christian and Dayton Christian, and then trampling Jefferson 17–6.

Against Troy, Joe Fugate pitched well and the Bulldogs held their own against one of the top teams in the state, until the fifth inning when Troy scored four and then in the sixth with another five. With only one hit in the game, the ’Dogs were defeated 11–0.

Against Dayton Christian, another tough competitor, starting pitcher Lucas Donnell got roughed up in the third, giving up three straight hits to the top of the lineup. He settled down to pitch a complete game, but the ’Dogs only scored two on the night, going down 6–2. Kevin Sikes-Gilbert went 3 for 4 and Jamie Kitzmiller went 2 for 4.

Yellow Springs hosted the Jefferson Broncos Saturday, going out to a quick 4–0 lead in the first inning. The Broncos got that back and more in the third, but then the Bulldog bats started and didn’t stop. Kitzmiller had a double and a triple, Tyler Fox a triple, Matt Finn a double and single and A.J. Wagner, Sikes-Gilbert and Donnell each had two singles to win on the run-rule. Austin Severtson pitched four strikeouts, with freshman John Shaw starting in right field and freshman Jake Fugate relief pitching in the fifth with two strikeouts.