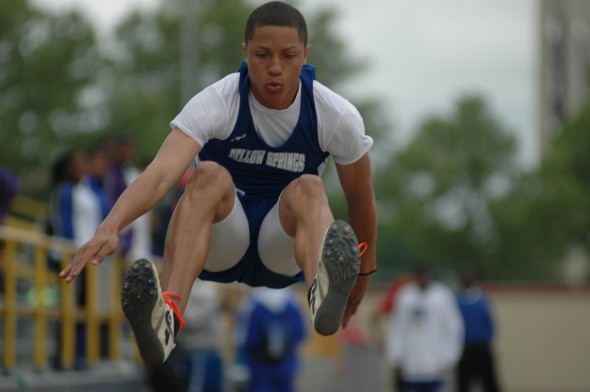 An unseasonably chilly day couldn’t cool off the Bulldogs’ Mario Cosey and Chris Johnson during the Division-III district meet at Welcome Stadium in Dayton on Tuesday, May 18. Cosey left no doubt as to who was the fastest athlete on the track.

His qualifying mark of 11.24 seconds in the 100-meter dash was the fastest time recorded in the event for the day. Cosey will run in the finals on Saturday in Dayton. He’ll need to finish in the top four to advance to the regional meet. “The goal at this point is to move to the next level,” Coach John Gudgel said about Cosey. “His chances are really good.”

The junior will also join Logan Norris-Sayres, Will Ripley, and Johnson in the 4×200-meter relay finals on Saturday. In Tuesday’s qualifier, Cosey came from behind in the final stretch to win the heat for the Bulldogs. The squad’s final time of 1 minute, 33.63 seconds was the best qualifying mark in the event.

Johnson, who is coming off his long-jump victory at the Metro Buckeye Conference league meet on May 14, leaped his way into next week’s regional meet with a mark of 20-5¼, good enough for fourth place.