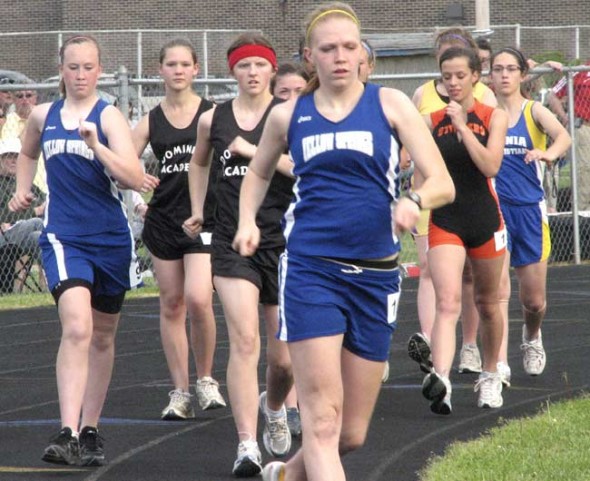 The YSHS track and field team turned in strong performances at the Bulldog Invitational on May 7, with the girls team winning with 76 points and the boys team finishing second (75) behind Shawnee (88). The Lady Bulldogs only won two events during the day, but placed in several other events to give the squad a first-place finish among a 12-team field.

First-place finishers for the girls included Natasha Perry in the triple jump, whose mark of 28-9 bested Wayne’s Leah Fox’s mark by 2 inches. Reini Brickson also turned in a dominating performance in the 800-meter walk, finishing with a time of 3 minutes, 48.6 seconds.

Brickson crossed the finish line one minute before second-place finisher and teammate Keturah Fulton. Brickson said she got in shape for race walking by participating in the Penn Relays a few weeks ago. The practice paid off.

“Not everyone can [race walk],” the senior said. “People try but they give up halfway through. If you are consistent with practicing, then you will get really good.”

Another highlight for the Bulldogs came when Lois Miller broke the school record in the mile with a time of 5 minutes, 47.3 seconds. Despite this milestone, Miller finished in second place. Xenia Christian’s Bethany Norman bested Miller by about 8 seconds to win the race.

Other contributions came from Anna Karling, who finished third in the triple jump with a mark of 28-5. Elizabeth Gonder turned in a third-place performance with a time of 1 minute, 5 seconds in the 400-meter dash. Maryah Martin’s high jump mark of 4-8 earned the leaper second place and Angela Allen’s mark of 83-8 in the discus was good enough for fourth place.

The boys came close to defending last year’s victory at the Bulldog Invitational, but Shawnee proved to be too tough of an opponent. The boys were led by junior Mario Cosey, whose 11-second time in the 100-meter dash narrowly edged out teammate Logan Norris-Sayres.

It’s the second meet in a row that Cosey has won the 100-meter dash. Head coach John Gudgel attributed Cosey’s success to where the junior is as a runner, and where he wants to end up.

“Mario’s really starting to come into his own,” Gudgel said. “He has some really lofty goals. He realizes to get to where he wants to be, he’s got to work hard, and it will pay off in the end.”

Chris Johnson’s second-place finish in the long jump helped the Bulldogs move up the leader board, but left the senior thinking of what could have been.

“I’m not too proud of [my jumps],” Johnson said. “I’m pretty disappointed. I thought I was going to do better than I did.” Johnson added that something in his steps leading up to his jumps, “didn’t feel right.”

Cosey, Johnson, Norris-Sayres and Will Ripley also scored big for the Bulldogs by turning in a time of 44.4 seconds in the 4×100-meter relay. Ripley also gave Emmanuel Christian’s Joel Elliot a scare in the high jump finals, although in the end, Ripley was not able to match Elliot’s final jump and finished with height of 6-2.

Other performances of note came from Antone Truss, who finished third in the triple jump with a distance of 36-10, and Mitchell Brickson, who won the boys 800-meter race walk with a time of 3 minutes, 33.8 seconds.

The boys and girls will race again Friday, May 14, at Troy in league competition.