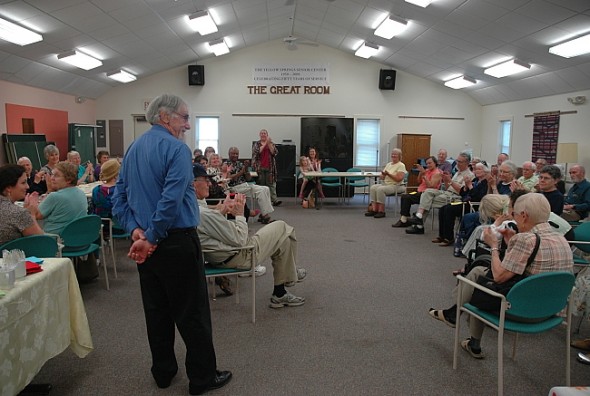 Rodney Bean receives a roaring round of applause for his 11 years of service as the Senior Center executive director at a reception in his honor on Friday. (Photo by Megan Bachman)

Yellow Springs Mayor David Foubert declared May 28, 2010 to be “Rodney Bean Day,” in honor of Bean’s 11 years of service as the executive director of the Yellow Springs Senior Center.

“He has gone out of his way to provide wise and witty leadership,” according to Foubert’s official proclamation, which Senior Center Board President Anna Hogarty read at a farewell reception for Bean on Friday. It also cited the expansion of services and creation of an endowment at the center under Bean.

“Yellow Springs is a community where people take care of each other,” Bean said, adding that he is confident that the center will do well without him.

“He’s made [the Senior Center] a home away from home,” said local resident Ellen Duell. “I hope he won’t go too far away.”