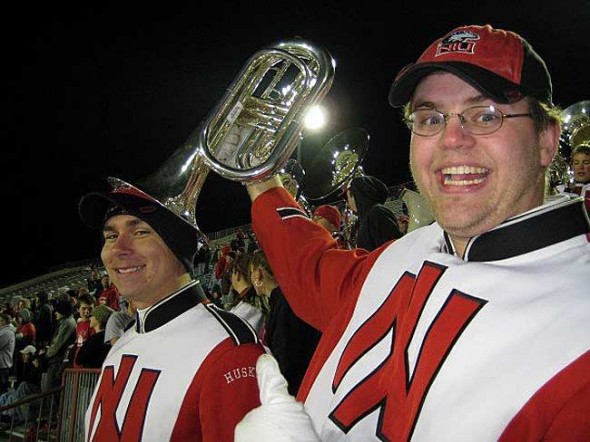 Yellow Springs native Brian Mayer, right, and his classmate Dan Mueller from Northern Illinois University played together in the school’s pep band. They will join their fellow graduates from NIU in a benefit horn, piano and vocal concert at the -First Presbyterian Church on Saturday, June 26, at 7:30 p.m. (Submitted photo)

Yellow Springs raised Brian Mayer to love music. He began playing the trumpet at Mills Lawn, and by junior high he knew that music would be his career. He left the village to pursue that goal, and now he plans to return, with a few friends, to give back to the community that helped him find his gift.

On Saturday, June 26, Mayer and four of his friends from Northern Illinois University will give a mixed brass, piano and vocal concert at the First Presbyterian Church as a benefit for the church. The program, which starts at 7:30 p.m., includes 11 solo, duet and ensemble pieces, one of which is an original composition by NIU alumna Stephanie Pieczynski. The suggested donation for admission is $10, and the proceeds will help the church repair a leaky roof.

Mayer began, as many local youth do, in the fifth-grade music program by choosing an instrument and practicing until he got good at it. Trumpet was his first pick, and he played it every chance he could — in the school band, in the pit orchestra for theater productions and in local ensembles. Then he picked up the bass guitar to play in a church youth band. And he thought, why be limited to just a couple of instruments when there are dozens more just calling to be strummed, plucked and blown? During his sophomore year in high school, under the tutelage of then Yellow Springs High School band director Mike Ruddell, Mayer significantly increased his opportunities to play by branching into all the brass instruments and dabbling in the reeds as well.

“Mr. Ruddell suggested that I spend lunchtime with the junior high band. So I coached them my junior year,” Mayer said. “And for my senior project, I taught the fifth- and sixth-grade bands every morning.”

By the time he graduated high school in 2003, Mayer not only wanted to play and teach music, he wanted to learn how to make and repair the instruments, too. So he enrolled in a one-year program at Southeast Technical college in Red Wing, Minn., before starting his bachelors in music education at Northern Illinois. There Mayer focused more on performance and conducting and after graduating last month, he got a job teaching music at Eswood School District near Chicago. During that brief interlude between school and work, he and his friends will entertain the village for an evening.

At the top of the program is Pieczynski’s original duet for English horn and French horn, performed by her and Mayer. Mayer commissioned the piece for this concert (though it debuted last month at Mayer’s senior recital) as an experiment in multiphonics, which for brass players means playing a note and humming one pitch higher at the same time. The result sounds like a didgeridoo with a bright ring.

Also on the program, pianist Mary Hwang will accompany Van Parker on French horn in a Saint-Saëns duet and Dan Mueller on euphonium in “Blue Bells of Scotland” and “Carnival of Venice,” an early 20th century virtuoso show piece. Mayer, Hwang and Parker will play Handel’s concerto for two natural horns, which are valveless versions of their French cousins. Hwang and Parker will also perform solos by Liszt and Bernard Krol. Young vocalist Minnita Daniel-Cox will end the concert with two song sets, accompanied by local resident Beverly Logan on the piano.

For Mayer, the First Presbyterian Church provided an outlet for his musical performances. The church provides a central space for the community as well, and its commitment to its own music program, directed by former Antioch College faculty member James Johnston, seemed a good fit for the benefit idea, Mayer said. After all, while Mayer may have honed his talents at the university level, “the high school and the church — that was the arena where I could test out things, because the people at church will love it no matter what you play,” he said.

While Mayer has chosen to start out teaching, he didn’t abandon his love for the craft of instrument making. During school he spent a summer working on the production floor at Schilke’s brass instrument manufacturer outside Chicago. And he still has sights set on a dream to one day open a small brass instrument making company in a small town a lot like Yellow Springs. The relationship he has cultivated with the village and especially the church is bearing harmonious results and will continue to do so if Mayer has anything to do with it.

“The church has given a lot to the community, and this is the first thing I could do to give back and thank them for having their doors open all the time” he said.