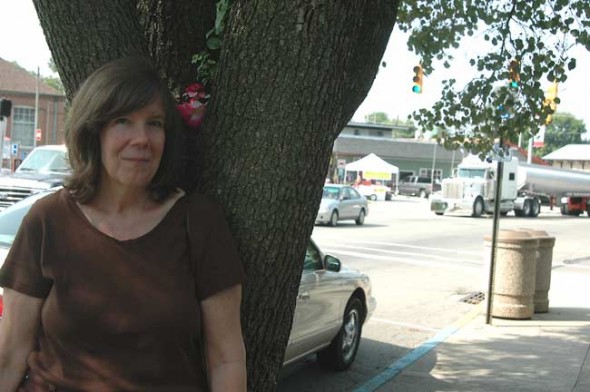 Over the weekend villagers may encounter flower fairies nestled in trees on Xenia Avenue downtown. Created out of silk flowers by local painter Kathleen McMillan, the flowers are a spontaneous piece of installation art intended to “make some magic” downtown, according to McMillan, who could be spotted on Friday spritzing her creations with fairy dust.

McMillan came up with the idea recently when she was cleaning out her house, and wanted to create something out of the silk flowers she had stashed away. Originally intending to give the flower fairies to the local Jafa Girls, who have created much of the downtown yarn art, McMillan ended up instead installing the fairies herself, either nestling them in branches or hanging them from limbs with fishing wire.

While she didn’t expect the fairies to be noticed, they seem to be catching people’s eyes, as she’s observed several people taking photos of the fairies. McMillan is especially pleased that one woman from Cincinnati asked if she could take a fairy made out of peonies to her mother, who loves peonies and is living in a hospice. McMillan said yes.

In fact, she’s offering the flower fairies to anyone who would like one, as long as villagers give the tiny fairies a few days to do their magic downtown before taking them away.