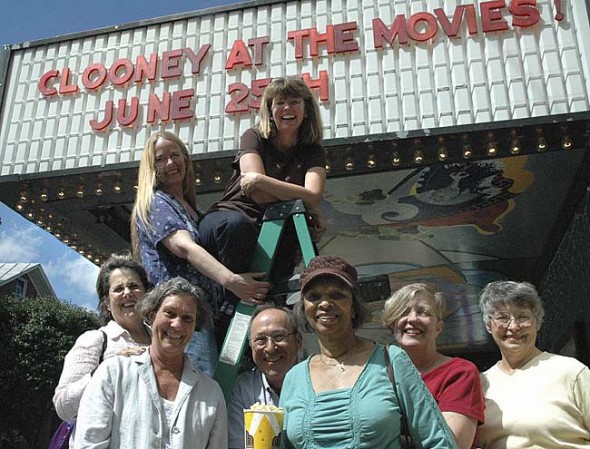 A group of Little Art Theatre supporters organized the theater’s first fundraiser, an auction gala, “Clooney at the Movies.” While the event is sold out, villagers can still buy raffle tickets to get a year’s worth of free movies. In the top row are Jenny Cowperthwaite-Ruka and Kipra Heerman, and in the bottom row, from left, are Dorothy O. Scott, Diane Foubert, John Geri, Alice Earl Jenkins, Maureen Lynch and Jane Scott. (Photo by Megan Bachman)

For 80 years the Little Art Theatre has played a leading role in the cultural life of Yellow Springs, being described as a local icon, the community’s living room, an intimate setting and the heart of downtown.

The struggling theater, which recently turned non-profit, now asks for the community’s support with its first fundraising event, an auction gala on Friday, June 25, at 5:30 p.m. at Antioch University McGregor, which also commemorates the Little Art’s 80-year anniversary.

“What we’re celebrating is not the small theater, it’s what it stood for, what it meant for all that time, and how that connection need not be broken,” said television host and author Nick Clooney, who will speak at the event, called “Clooney at the Movies.”

The event also features a silent and live auction with prizes donated by local and regional businesses, a raffle for free movie tickets for two for a year, gourmet food, wine and beer, and all-you-can eat popcorn. Although this week organizers realized that all 250 seats for the event are sold out, villagers can still help by buying a raffle ticket, available at the box office and at Current Cuisine. The raffle winner will receive a year’s worth of Little Art tickets.

Because of declining box office receipts, this year the Little Art must raise an additional $55,000 to stay in business. Since 2001, the “Friends of the Little Art” ongoing membership campaign has kept the theater operating, but as a tax-exempt nonprofit, the theater can now raise funds through grants and events. The auction gala is an important way of bringing in more money, and the Little Art hopes to raise $20,000 with the event, Heerman said.

“The theater’s financial challenges are the greatest they have ever been and that is why fundraising efforts are so important,” Heerman said. “Small-town movie theaters are fast becoming just a memory.”

Twenty-five local businesses and organizations have signed on to sponsor the event, with donations totaling $10,000. Organizing committee members believe it is the Little Art’s value to the community that has caused such an outpouring of support.

“It’s important to the community because it’s an option — you don’t have to go to the big box way,” said Alice Earl Jenkins, a member of the organizing committee. That the theater is within walking distance, shows independent rather than mainstream films and serves excellent popcorn were other reasons the committee cited.

“The event is for those interested in the Little Art, in great food, and in an auction,” said committee member Maureen Lynch, adding that attendees are invited to dress for the red carpet, though they aren’t required to. “It’s also for serious movie fans,” she said.

Clooney, father of actor George Clooney, host of American Movie Classics cable channel and author of The Movies That Changed Us: Reflections on the Screen, will show brief film clips at the gala and discuss how these movies have changed American society.

“Films are wonderful ways to celebrate our American and worldwide history because we can find exactly who we were at that moment,” Clooney said. “[Yellow Springs] is a wonderfully historic community, and of all the places that would understand, it would.”

The 80-year anniversary event recalls memories of the Little Art, from the theater’s founding in 1929 when it primarily featured westerns, through the 1950s, when the Antioch College Theatre Department performed plays on stage, to today, when documentary, foreign and independent films attract audiences. An especially historic item to be auctioned off is a set of autographed movie poster prints created by Judy Spock in the 1950s, when the Little Art’s posters were drawn by hand.

In total, about 100 items can be bid on, with all proceeds going to support the theater. Dining experiences, week-long vacations, horse riding lessons, bird hikes, jewelry, art, massages, books written by local authors, flowers, overnight stays and even a puppy will be auctioned.

Committee members, who volunteered for 18 months to organize the event, view their support for the Little Art as both supporting the community and supporting Jenny Cowperthwaite-Ruka, theater manager of more than 30 years and owner for the last 12.

“Jenny has been carrying a load on her back all these years — she’s given her life to this,” Heerman said. “She deserves to have a whole group of people with her.”

While the event is sold out, “Friends of the Little Art” memberships, which have doubled since the Little Art became a nonprofit, are available. Members can purchase discounted admission cards, but more importantly, they help sustain the Little Art Theatre.

“Even if people don’t get to the movies as often as they want to, ‘Friends of the Little Art’ is a great way to support it to keep it there,” said Cowperthwaite-Ruka, who is now the executive director of the Little Art Theatre Association. “I think [the Little Art’s] so important to the cultural infrastructure of Yellow Springs and I can’t imagine the community without it.”

Said Jenkins of the organizing committee, “The Little Art has an important role and if we aren’t careful, we’ll lose it.”