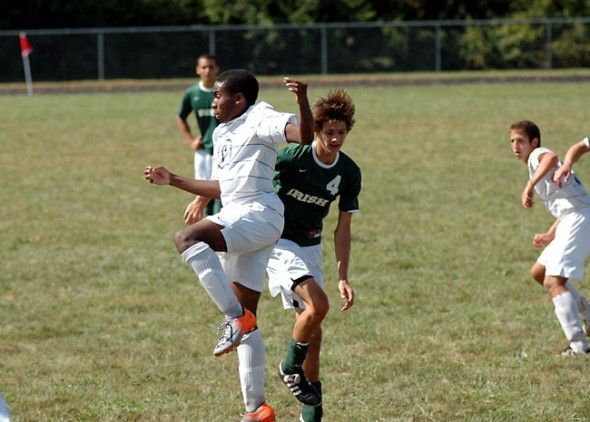 Mario Cosey goes up for a header against a Springfield Catholic Central forward during Saturday's 7-2 loss. (Photo by Megan Bachman)

Despite losing by a final score of 7-2 to Springfield Catholic Central on Saturday, the Yellow Springs High School boys soccer team kept the game close throughout most of the second half.

The Bulldogs battled back from a 4-0 deficit at halftime with two early second-half goals. Mario Cosey broke the scoreless streak on a goal assisted by Gabe Rehm and Nicky Sontag netted a penalty kick to bring the Bulldogs to within two.

However, the back line, exhausted by a pressing Irish offense, gave up a late goal with just over seven minutes remaining in the game. In the final minute of regulation, the Irish scored two more quick goals.

Next Thursday at 7 p.m. the Bulldogs face Dayton Christian in their conference opener.

See the upcoming issue of the Yellow Springs News for a full weekend sports recap.