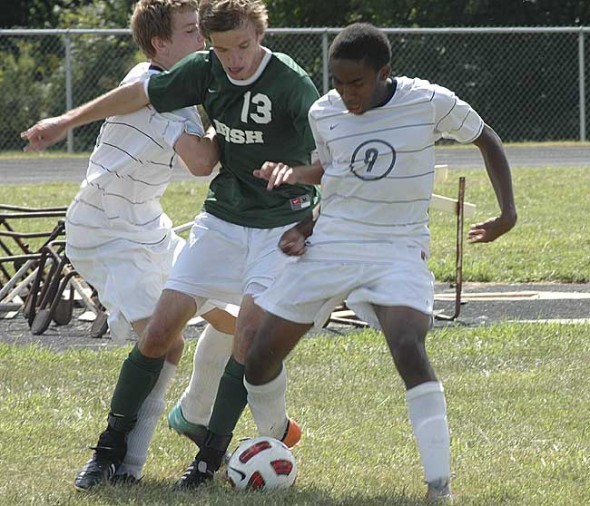 The Yellow Springs boys soccer team fell to Springfield Catholic 7–2 last Saturday, Sept. 4, at the school field, but the team put up a spirited battle. Shown above are, left, Bulldogs Eli Biggs and right, Mario Cosey, as they fought to keep control of the ball.

In the varsity women’s race the Lady Bulldogs improved their season record with a 12th-place finish out of the 23 schools scoring. Ninth grader Talia Boutis, running in the squad’s second position, posted a new season best time of 24:23 while overcoming the challenges of the difficult Liberty Park course. Lois Miller matched pace with the lead pack of women and placed ninth overall out of 238 at a time of 20:59. Following Boutis in the team scoring was Christina Brewer, who was 131st overall and 87th in the team scoring with a time of 25:59. Alex Beer and Hannah Kumbusky rounded out the top five and the squad’s scoring efforts, finishing in 27:06 and 27:19 respectively. Also running well but not scoring were Mary Triplett, 215th overall in 31:09 and AnnDee Pettiford, 230th in 32:55. The women’s squad’s season record now stands at 18 wins and 25 losses.

Led by senior Gabe Amrhein and junior Zach McHugh, the Bulldogs pounded their way over the lofty knolls in Hillsboro to finish fourth out of 28 teams. With 200 runners in the race, McHugh placed 25th overall at 18:32, with Amrhein mere steps later in 27th at 18:41, 18 seconds faster than his 2009 time on the same course.

Placing third among the team’s scorers, Mitchell Brickson bested his previous course time by a minute, finishing 39th overall in 19:09. The biggest improvement on the team went to Nerak Patterson, who placed 47th overall in a new season-best time of 19:24. Rounding out the top five was Nathaniel Reed, who placed 70th overall in 20:01. Also running well in the varsity race were seniors Josh Meadows, 99th overall in 20:55, and Lonya Clark, 103rd in 20:58. In the junior varsity race, newcomer J. J. Hazelbaker, just a freshman, placed 33rd out of the 89 runners in a time of 21:37. The Bulldogs’ record after two weeks stands at  38 wins to 14 losses.

The girls varsity volleyball team (1–3) split a pair of games this week while the junior varsity squad dropped another to move to 0–3 on the season. In a loss Tuesday, Aug. 31, to Emmanuel Christian (8–25, 17–25, 8–25), Brittany Klotz led the team with 10 points, Tasha Perry helped with five assists and Jenna Boettcher contributed four kills. Last week, on Thursday, Sept. 2, the team defeated Miami Valley School by scores of 25–7, 25–15 and 25–20. Tasha Perry led the scoring with 11 points, three kills and seven assists while Jenna Boettcher contributed nine points, three aces and two kills. Brittany Klotz and Maya Hardman each had eight points with two aces. The junior varsity team lost to Emanuel Christian 12–25, 11–25 with top performances from Hannah Brown, with five assists and Kennedy Harshaw, with two points and five kills.

Despite losing by a final score of 7–2 to Springfield Catholic Central on Saturday, the Yellow Springs High School boys soccer team kept the game close throughout most of the second half. The Bulldogs battled back from a 4–0 deficit at halftime with two early second-half goals. Mario Cosey broke the scoreless streak on a goal assisted by Gabe Rehm and Nicky Sontag netted a penalty kick to bring the Bulldogs to within two. However, the back line, exhausted by a pressing Irish offense, gave up a late goal with just over seven minutes remaining in the game. In the final minute of regulation, the Irish scored two more quick goals. The team opens conference play on Thursday in a match against Dayton Christian.

The Lady Bulldogs were swept by a very good team from Northwestern of Springfield by scores of 25–16, 25–19. Their record now stands at 1–1. The seventh-grade Lady Bulldogs were led by number 16, Madison Robinson, with eight points. Jalyn Roe and Madeline Nielsen added three each.