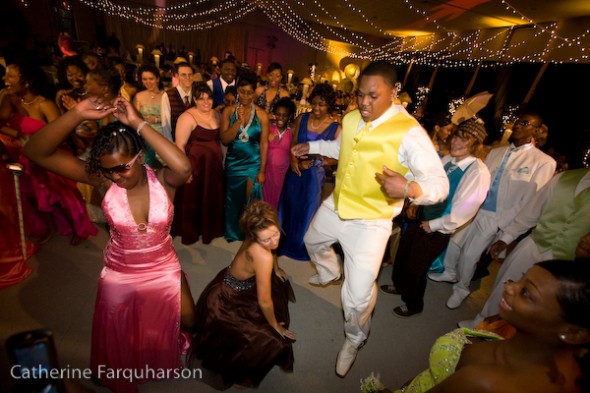 Students in Charleston, Mississippi dance at their first racially integrated prom in the 2008 documentary "Prom Night in Mississippi," screening tonight at the Little Art Theatre. (Photo Copyright by Catherine Farquarson; visit http://www.promnightinmississippi.com for more photos. This image is NOT for sale through the Yellow Springs News website.)

The Little Art Theatre will offer a second free screening of Prom Night in Mississippi on Saturday, Oct. 30, at 4 p.m. The documentary, shot in 2008, follows a group of high school seniors preparing for their first racially-integrated prom. Admission and popcorn are free of charge.

Prom Night in Mississippi, directed by Paul Saltzman, was filmed in Charleston, Mississippi, a town of approximately 2,000 residents. The local high school had segregated proms for black and white students until 2008, when actor Morgan Freeman offered to fund the prom himself, under the provision that it be racially integrated. Freeman has been a resident of Charleston since 1991, and originally approached the school with his offer in 1997, and was turned down.  The film follows the students of Charleston over a period of four months as they discuss Charleston’s history of segregation, and records the small town’s reactions, both positive and negative, to that history taking a different course.

Middle and high school students are especially encouraged to attend this free screening. Free popcorn will be provided for those attending, and a special discussion for students only will be held after the film.