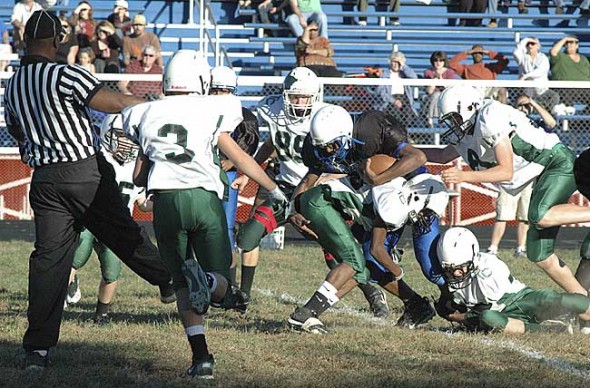 Running back Ahmad Wagner charged through the Troy Christian defensive line in the McKinney School football team’s 52–20 loss on Thursday, Oct. 7. The home game was the final test of the season for the Bulldogs, who kept the game close in the first half. Wagner passed for 50 yards and rushed for 189 yards. (Photo by Megan Bachman)

Girls soccer battles back to win

The girls soccer team triumphed over visiting Stivers on Wednesday, Oct. 6 by a score of 2–1. Just five minutes into the game, Stivers went up 1–0. But the Lady Bulldogs fought back, taking 12 shots on goal in the first half and allowing only one. YSHS freshman Sharde Scott-Manning evened up the match when she scored in the 30th minute for a 1–1 tie going into halftime. The second half was dominated by the Yellow Springs defense, which kept Stivers from putting a shot on goal. Finally the deadlock was broken when sophomore Maya Hardman netted a goal with 15 minutes remaining in the match. Departing seniors Anne Weigand, Elyse Giardullo, Kelsey Cundiff, Maike Growe (Germany), Natasha Perry and Zara Kilic (Germany) were honored at the victory.

YSHS senior forward Aldo Duque netted four goals in the Bulldogs 5–2 victory over visiting Stivers on Wednesday, Oct. 6. Duque’s first goal came in the 10th minute, when a long Jazz Exel pass found Mario Cosey streaking down the right wing, who played the ball to Duque for an easy tap in. Nicky Sontag assisted on Duque’s next goal, beating four defenders before playing the ball to Duque in front of the goal. Duque flicked in a cross from Jacob Trumbull just three minutes later to put Yellow Springs up 3–0 at the half. While Stivers chipped away the Bulldogs’ lead, scoring twice early in the second half, Trumbull put away the match when he tapped in a loose ball from 15 yards out. Duque netted his fourth goal on a through-ball from Exel, placing a shot to the left post from the top of the penalty box.

Last Saturday the Bulldogs struggled to find their form against Newton and came up short, taking an 0–2 loss on the road.

The last remaining YSHS golfer, senior Carl Wiener, played in the district tournament on Thursday, Oct. 7. At Weatherwax Golf Course in Middletown, under sunny skies but tough course conditions, Wiener posted an 87. He was just six shots from qualifying for the state finals.

The YSHS boys cross-country team faced runners from Xenia Christian and Xenia at their home course on Thursday, Oct. 7, taking five of the top six finishing spots. The team missed a perfect score by one point and won the meet 16–31 to improve their season record to 105–38. Placing in the first four positions were senior captain Gabe Amrhein, Zack McHugh, Nerak Patterson and Mitchell Brickson, with Nathaniel Reed coming in sixth. Also running well for the Bulldogs, but not scoring were Josh Meadows, 11th overall, Lonya Clark, 13th, and JJ Hazelbaker, 15th.

At Buck Creek two weeks ago, the squad finished fifth out of 21 schools and averaged a season best of 18:02 for the top five runners.

At the home tri-meet against Xenia Christian and Greeneview on Thursday, Oct. 7, Lois Miller led the Lady Bulldogs with a second place finish, followed by Christina Brewer, who came in seventh. Overall, the team came in second out of three teams. Also running well and scoring for the Lady Bulldogs were Hannah Kumbusky, Alex Beer and Olivia Ramage.

The team came in 12th out of 17 teams in a meet at Buck Creek the previous week. Lois Miller took 17th overall and Christina Brewer improved on her personal record by 90 seconds, placing 59th.

In the McKinney boys race at the home tri-meet on Oct. 7, eighth-grader Fielding Lewis captured the individual title with Nathan Miller coming in third and Edward Johnson finishing sixth. The team placed second overall. With not enough runners to compete as a team, seventh-grader Charlotte Walkey was the girls team’s top finisher, coming in fifth place, with Sage Hale-Wolfe also running well.