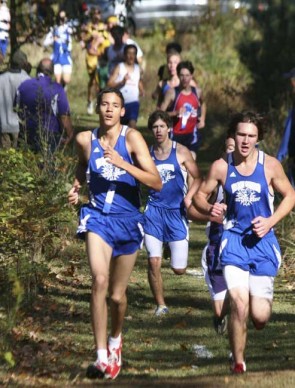 At the Metro Buckeye Conference championships held last Saturday at John Bryan State Park, Yellow Springs seniors Gabe Amrhein and Nerak Patterson led Yellow Springs to the hotly contested men’s title by finishing fifth and seventh overall. It was the Yellow Springs boys’ sixth conference title in the past seven years. The Bulldogs topped the six other teams competing with their 60 points, 11 points ahead of the runner up.

Boys soccer wins and ties on the road

The boys soccer team traveled to Northwestern on Monday, Oct. 11, and brought home a hard fought 1–1 tie. The Bulldogs took a 1–0 lead when Jazz Exel headed in Cole Edwards’ throw-in with just two seconds left in the first half. Northwestern stepped up the pressure on the Bulldog defense in the second half and earned the equalizer with less than 15 minutes remaining in the contest.

In its final regular season game, the team came away with a 1–0 victory against its Metro Buckeye Conference rivals Troy Christian on the road last Saturday. Jazz Exel netted the lone goal for Yellow Springs early in the first half from 10 yards out, with an assist from Aldo Duque. The team finished their season with a record of 5–7–3.

Against Xenia Christian, the girls junior varsity volleyball team ended their season with a win in straight sets, 25–22, 25–16, improving their record to 7–9. Hannah Brown led the team with 12 points and six assists, Kennedy Harshaw had nine points and eight aces and Lindsley Mitchell contributed six points and two aces.

Fielding Lewis of Yellow Springs won the junior high boys race at the Metro Buckeye Conference championships last Saturday, helping the team to a first-place finish out of five teams. Also finishing in the top ten for the Bulldogs were Edward Johnson, third, and Nathan Miller, fourth, with 43 runners competing.

In the McKinney girls race, Charlotte Walkey came in third place out of 12 runners.