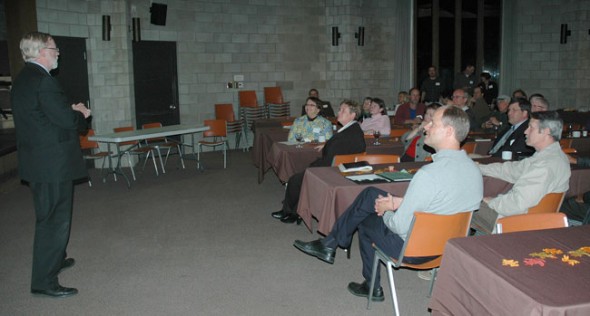 Dr. Mark Shanahan told a local audience that while Ohio's emissions from coal were among the worst in the nation, the state has recently been aggressive in promoting renewables. (Photo by Megan Bachman)

More than 880 megawatts of wind power have been approved by the state, which aims to have 12.5 percent of its energy coming from renewables by 2020, Shanahan said. In addition, Ohio has more LEED-certified schools than the next three states combined.

The forum was organized by the new local company, Yellow Springs Renewable Energy, which hopes to help the village could produce, and ultimately own, its own solar power.

“In Yellow Springs we have a grand vision of reducing the community’s carbon footprint in addition to its lifecycle costs,” the company’s CEO Paul Wren said at the meeting. 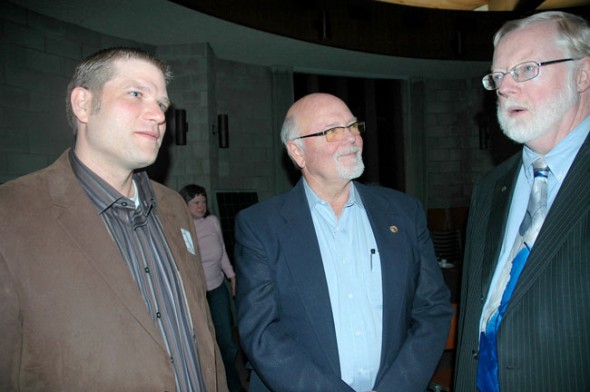 From left, Scott Lindstrom of local HVAC company, Lindstrom-Sprague Mechanical Services and Paul Wren of Hytek Energy talk with Shanahan at the forum. Lindstrom and his wife, Shannon, have partnered with Wren to form Yellow Springs Renewable Energy. (Photo by Megan Bachman)

Shanahan said that moving to renewable sources of power is critical for Ohio, which relies on coal for 87 percent of its electricity. He also said that if Ohio were a country, it would be the 18th largest energy consumer in the world.

“Coal’s been good to us but has caused challenges and renewables can help us overcome these challenges,” Shanahan said.