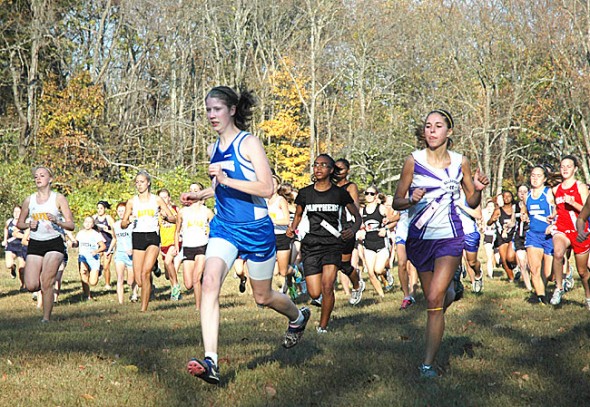 Lois Miller led a field of 146 runners at the John Bryan Invitational on Tuesday. She won the race 50 seconds ahead of the second place finisher. (Photo by Megan Bachman)

Miller, a sophomore, finished ahead of 145 area runners with a time of 20:06 for the three-mile race. From the start, Miller dominated the field, taking an early lead and finishing 50 seconds ahead of the second place runner. She is the third fastest female in the history of YSHS girls cross country.

Christina Brewer also ran well for the Lady Bulldogs, finishing in 11th place with a time of 22:09. Loyna Clark was the first YSHS runner to finish in the boy’s race, coming in 56th place at 19:59 out of 205 runners. In the junior high races, Yellow Springs runners Fielding Lewis and Charlotte Walkey placed third and 31st.

See the Oct. 28 issue of the News for more sports coverage.