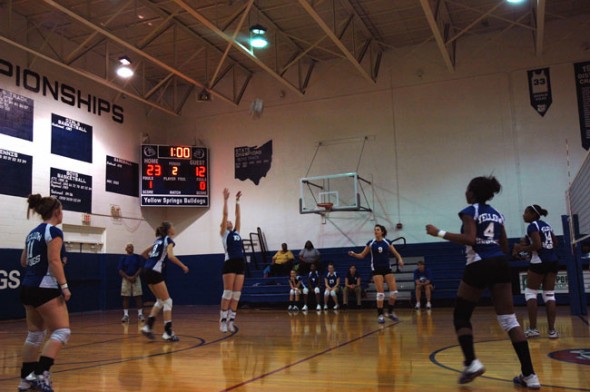 Yellow Springs' Brittany Klotz sets the ball to a teammate in her 12-point performance versus Dayton Jefferson last Thursday. (Photo by Megan Bachman)

The Yellow Springs varsity volleyball team dominated Dayton Jefferson in three straight sets last Thursday (25–14, 25–12, 25–11). The visitors kept the match close early on before the Lady Bulldogs ran away with the first set and kept their momentum strong throughout the second and third sets.

Leading the team was Brittany Klotz with 12 points and six kills followed by Maya Hardman, who had 11 points, nine kills and three blocks during the match. Tasha Perry helped her teammates put away the visitors with her 23 assists. Jenna Boettcher contributed five points, two aces, and five kills.

The win improves the varsity volleyball team’s record to 7–10 on the season, with an away tri-match at Stivers coming up on Saturday, Oct. 2.

See the print edition of the YS News for more sports coverage.